Why AI Is an Air Force Pilot's New Best Friend 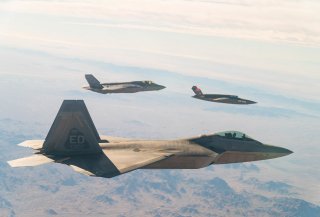 The Air Force wants more extremely advanced unmanned drone fighter jets capable of high-speed aerial maneuvers, winning dogfights, and performing most if not all of the major missions performed by human pilots. At the same time, despite the rapid growth and promise of AI and computerized dog fighting prowess, human pilots are not likely to go anywhere anytime soon.

“We are so multifaceted as human beings, yet machines will be specialists in certain areas,” Air Force Chief Scientist Victoria Coleman told The Mitchell Institute for Aerospace Studies.

“How do we have humans and machines operate together to get better outcomes? Experimentation is already taking place. The way to deploy more of these teams is through more and more experimentation. If we test a little, we can feel comfortable going to war,” Coleman said.

For instance, Coleman addressed the fast-developing “loyal wingman” phenomenon, a tactical and technological breakthrough that is already underway through coordinated flights between an Air Force Valkyrie drone and F-35s, for example. Continued progress with efforts to refine operational and strategic specifics will further empower the advantages introduced by having pilots control multiple drone operations from the cockpit of an aircraft.

Also, the Air Force seems to have already figured out that the best warfighting approach is to simply combine AI and human pilots together for aircraft combat operations. The service recently experimented with efforts to fly a manned jet with an AI-empowered co-pilot. It would not be a surprise to see more of this in the future. Earlier this year, an AI-enabled computer algorithm operated onboard a U-2 spy plane while in flight, coordinating navigational details, sensor information, and reconnaissance missions alongside a human pilot.

The AI algorithm, called ARTUu, flew along with a human pilot on a U-2 Dragon Lady spy plane, performing tasks that would “otherwise be done by a pilot,” an Air Force report explained.

“It is all about experimentation. With software, we know how to do that. How do we do that with airplanes? If our goal is to get ahead by fielding rapidly, we need to change our testing infrastructure,” Coleman said.

Perhaps .. at least for now .. the matter is resolved. AI and the human brain will fight wars together.