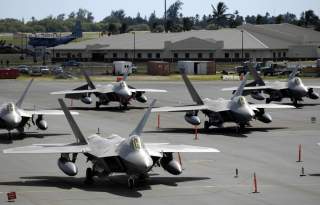 In an update the 325th Fighter Wing shared on Facebook in the aftermath of Hurricane Michael’s landfall, leadership at the Florida base detailed a “complete loss” of base facilities. Several critical installations sustained “catastrophic” damage; other facilities, like the Tyndall marina and docks, are simply gone.

But the most devastating impact of Michael may lie far beyond the bases’ devastated flight line and reverberate across the U.S. military’s air superiority posture at a time when the service branches are focused on their expanding their capabilities.

Tyndall is home to 55 F-22 Raptor fifth-generation fighter jets, at least 33 of which were dispatched to Wright-Patterson Air Force Base in Ohio ahead of Michael’s landfall, the New York Times reported on Oct. 11, suggesting that some 22 fighters may have been deliberately left behind.

According to reporting from Foreign Policy, “as many as” 17 Raptors “may be damaged or destroyed.” Indeed, satellite photos revealed the wreckage of several of the pricey stealth fighters among the debris.

Things may not be as bad as initially feared. “We also looked into each of the hangars that housed aircraft which weathered the storm for maintenance or safety reasons,” Air Force spokeswoman Ann Stefanek told Task & Purpose on Monday. “Visually, they were all intact and looked much better than expected considering the surrounding damage to some structures.”

“Our maintenance professionals will do a detailed assessment of the F-22 Raptors and other aircraft before we can say with certainty that damaged aircraft can be repaired and sent back into the skies,” she added. “However, damage was less than we feared and preliminary indications are promising.

While Stefanek could not immediately confirm the exact number of F-22s present at Tyndall when Michael hit, it’s a potentially major black eye for the service. The loss of 17 Raptors would mean that Hurricane Michael quite literally decimated the Air Force’s F-22 fleet.

A Government Accountability Office report published in July indicated that less than half of the Air Force’s 186 F-22s — 80 airframes total — are mission-capable, with some 125 assigned to combat units — a rate, the Times points out, is the lowest in the Air Force due to the airframe’s costly and unique maintenance requirements.

The destruction of the Tyndall F-22s will have consequences far beyond a $7.5 billion loss to Pentagon.

The GAO report notes that “unique maintenance challenges (like the Low Observable (LO) coating that’s a critical part of the Raptor’s stealth capabilities) and a shortage of spare parts arising from the airframe’s low initial production rate have already crimped readiness by limiting the number of airframes available for training and flying hours for pilots assigned to non-deployed units.

The sudden shortage of airframes won’t just make existing readiness issues more pronounced — and, as Stefanek said, it was the reason those F-22s were stuck at Tyndall in the first place.

“[Both the] F-22 and F-35 fleets also suffer from similar parts shortages and logistical logjams,” as The War Zone’s Tyler Rogoway wrote. “An aircraft that had critical components taken off of it to help keep another aircraft flying is not that likely to be able to wing it out of an air base in a matter of a couple days as a storm moves into the region.”

Unfortunately, this readiness shortfall comes at a time of high demand for the Air Force’s F-22 fleet: The favorite aircraft of domestic intercepts, the Raptor is increasingly in the fight in the skies above Syria following its first-ever “combat surge” over the last six months.

All of this is, more broadly, bad timing for the fifth-generation fighter family: the F-35 Joint Strike Fighter, notoriously expensive and fraught with mechanical issues, went from its first combat strike in Afghanistan to a fleet-wide grounding in the span of a few weeks. Even before the grounding, the F-35A’s mission capable rate dropped from 68% to 54.6% over a few years, a shaky start to a nascent fleet.

Of course, these shortcomings are a confluence of systemic problems, but they come amid ambitious plans from Pentagon leaders.

Just days before Michael arrived, Defense Secretary James Mattis ordered the Air Force and Marine Corps to push their F-35, F-22, F-16 and F-18 mission capable rates to above 80% in the next year. It almost certainly throws a wrench in the Air Force’s plan to add hundreds of mission-ready airframes in the coming years in a return to Cold War number.

So just how bad is this? Stenfanek told Task & Purpose that both Air Force Secretary Heather Wilson and Chief of Staff Gen. David Goldfein arrived at Tyndall on Sunday afternoon to get an update on the condition of the base and the aircraft that were there during the storm.

Time will tell if things are as bad as they seem from above.