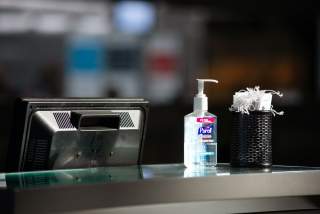 Since the outbreak of COVID-19, sales of hand sanitisers have soared. It’s become such a sought-after product that pharmacies and supermarkets have started limiting the number that people can buy at one time. New York state has even announced it will start producing its own hand sanitiser to meet demand. Though hand sanitisers can help reduce our risk of catching certain infections, not all hand sanitisers are equally effective against coronavirus.

As with other viral respiratory infections – like the common cold and flu – the novel coronavirus (called SARS-CoV-2) is mainly spread when virus-laden droplets from a person’s mouth or nose are transferred to other people. However, a recent study has suggested that it can also spread through faeces.

Aside from inhaling droplets, you can also get respiratory viruses including SARS-CoV-2 by touching anything contaminated with the virus and then touching your face, in particular your mouth or nose. We touch our faces a lot without even realising it. A study from New South Wales found that people touch their faces about 23 times an hour

But hand sanitisers can also protect against disease-causing microbes, especially in situations when soap and water aren’t available. They’re also proven to be effective in reducing the number and type of microbes.

There are two main types of hand sanitisers: alcohol-based and alcohol-free. Alcohol-based hand sanitisers contain varying amounts and types of alcohol, often between 60% and 95% and usually isopropyl alcohol, ethanol (ethyl alcohol) or n-propanol. Alcohol is known to be able to kill most germs.

Alcohol-free hand sanitisers contain something called quarternary ammonium compounds (usually benzalkonium chloride) instead of alcohol. These can reduce microbes but are less effective than alcohol.

Not only are alcohol-based hand sanitisers found to be effective at killing many types of bacteria, including MRSA and E coli, they’re also effective against many viruses, including the influenza A virus, rhinovirus, hepatitis A virus, HIV, and Middle East respiratory syndrome coronavirus (MERS-CoV).

Alcohol attacks and destroys the envelope protein that surrounds some viruses, including coronaviruses. This protein is vital for a virus’s survival and multiplication. But a hand sanitiser needs to be at least 60% alcohol in order to kill most viruses.

Hand sanitisers with less than 60% alcohol were also found to be less effective at killing bacteria and fungi and may only reduce the growth of germs rather than killing them outright.

And even hand sanitisers containing 60% alcohol can’t remove all types of germs. Studies have found that hand washing is more effective than hand sanitisers at removing norovirus, Cryptosporidium (a parasite that can cause diarrhoea), and Clostridium difficile (bacteria which cause bowel problems and diarrhoea).

With shortages leading some people to try and make their own hand sanitisers, it’s also important to know these might not be as effective as commercially available products.

If hands are visibly dirty, hand washing with soap and water is more effective than using alcohol-based hand sanitisers. Research has found that the detergent effect of soap and the friction of washing work together to reduce the number of microbes on our hands, as well as the dirt and organic materials.

Sneezing or coughing into your hands also requires more than just a pump of hand sanitiser to disinfect them. This is because if your hands are contaminated with mucous, the hand sanitiser might not work as well because mucous acts to protect microbes.

As a result, the best and most consistent way of preventing the spread of the coronavirus – and reducing your risk of contracting it – remains washing your hands with soap and water as a first choice, and avoiding touching your face as much as possible.

But alcohol-based hand sanitisers (with at least 60% alcohol) are a practical alternative when soap and water aren’t available. If you are using hand sanitiser then, just like when washing with soap and water, you need to make sure you cover your hands (including between your knuckles, wrists, palms, back of your hand and your fingernails) fully, rubbing it in for at least 20 seconds so it’s truly effective.