Why America (and Donald Trump) Are Addicted to Drone Wars 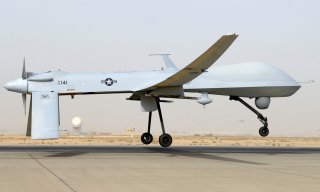 As the United States convulses with protests and riots over the killing of George Floyd, assassinations continue to be carried out in our name around the world. Despite few or no signs of success in countries like Somalia, the Trump administration has doubled down on a core tactic embraced by politicians from both parties in the war on terror: the use of drones.

An estimated 155 air and drone strikes have been launched in Somalia since Donald Trump assumed office. This is a fivefold increase over the number carried out during Barack Obama’s last term. There are similar increases in Yemen and Afghanistan where the United States no longer releases data on air and drone strikes. In most cases, increasing numbers of civilian deaths track the frequency of drone strikes.

The myopic U.S. news media devotes little coverage to America’s ongoing drone wars. This is just as it is meant to be. Drone warfare comes with no physical danger for the soldiers and contractors who operate them from their air-conditioned boxes thousands of miles away from those they target. They are invulnerable. It is war by remote control and death by algorithm.

Policymakers and politicians do not have to worry about grisly headlines describing dead and injured American soldiers. There are no inconvenient questions from the public about why and what American soldiers are dying for. The media generally gives no voice to those killed by drones in countries like Somalia, Yemen, Pakistan, and Afghanistan.

The dead are declared militants, regardless of whether they are militants or not, and forgotten. Though to be forgotten they would have to merit discussion. And they do not—not in the United States. With few costs beyond the financial, war by remote control is the go-to method for combatting those the United States labels militants and terrorists around the world.

Reliance on drones, like the “War on Terror” itself, is a tactic devoid of strategy that only creates more terrorists and militants. The Center for Strategic and International Studies estimates that between 2001 and 2018, the number of militant Salafi-oriented fighters has increased nearly four hundred percent. This is probably an underestimation. The use of drones, in particular, has fueled recruitment for militant Salafi groups across the Muslim world.

In the course of numerous visits to Yemen and the Horn of Africa, government officials, community leaders, and tribal elders repeatedly told me that: the United States’s use of drones, and more broadly its ill-conceived War on Terror, are fundamental to the popularity of various militant Salafi organizations. A tribal elder from the south of Yemen explained, “they (the drone operators) watch us like animals in a zoo. And they kill us when they want to. The boys and young men, if they are to think of themselves as men, must do something to fight back, to seek vengeance. So, many of them join whoever promises to help them do that.”

Most of these groups, including al-Shabaab in Somalia, now field their own drones. It will not be long before even small, poorly trained and funded, militant groups can deploy drones, or even swarms of drones, that are capable of tracking and killing targets far from those who are flying them. In fact, advanced fly and forget technology, which is widely available, means that militants and terrorists need not place themselves in danger.

Despite spending $6.5 trillion, one is hard-pressed to point to a single country where U.S. policies have resulted in greater stability and a sustained decrease in insurgent numbers. In almost all of the countries in which U.S. forces are involved, the opposite is the case. Yet, there is no fundamental rethink by Republicans or Democrats of the United States’ Forever War or its reliance on armed drones. Nor is there likely to be.

In his book, A Theory of the Drone, Grégoire Chamayou, argues that drones have already reshaped decision making in warfare, “because the threshold of recourse to violence is drastically lowered, violence tends to be seen as the default option for foreign policy.” Just as there is little or no discussion of those routinely killed by the United States’ drones, there is no public debate about the efficacy of a foreign policy—if one can call it that—that is all too often built around the assassination. Instead, there are morbid and largely unquestioning news articles touting the CIA’s latest and most “ethical” variant of the Hellfire missile which uses blades to slice up—rather than blow up--those it targets.

During a recent trip to the unrecognized Republic of Somaliland, a country that successfully battles terrorism on its own, a senior official with Somaliland’s intelligence service explained to me, “you can’t understand a community, much less a country, by watching it on a video screen. Our approach to counter-terrorism is community-centric. The people provide the intelligence we need to fight al-Shabaab.”

It is this human intelligence and community-level engagement that is critical to combatting insurgency and terrorism. Both are essential to understanding how people may or may not be interacting with groups like al-Shabaab. People living in parts of Somalia and Yemen often have no choice but to deal with members of militant and terrorist groups to conduct business, move goods, and settle disagreements. In the case of al-Shabaab, the organization is pervasive. If you are a Somali living in parts of that country, you will have to interact with members of al-Shabaab, regardless of whether you support them or loathe them, as most Somalis do. Yet, this interaction may also mark you or your family members for death by the drones that watch from above. Either a computer program or an “analyst” who has more than likely never set foot in Somalia, or some combination of the two will decide it is your day to die. With the push of a few buttons in a “cockpit” thousands of miles away, lives are ended and the drone moves on to the next target.

Counter-insurgency is, in of itself, fraught with problems and rarely successful as Gian Gentile makes clear in his book, Wrong Turn. However, drone-centric antiterrorism tactics are even more problematic. “Success” is measured in the number of “militants” killed rather than how these killings impact communities, sentiments, and the terrorist groups they purport to target. Just as there are few questions from the media or the American public about the United States’ drone wars, policymakers rarely step back and ask: is any of this working?

As unarmed Predator drones orbit above protests in American cities, it is worth thinking about what acceptance of this technology means for the country and the world. As Chamayou argues, “one of the questions that arises is whether the societies that have, for the time being, failed to rule out the use of this technology in wars waged on the other side of the world will eventually realize, perhaps with a jolt, that this technology is designed to be used on them too.”

George Mason, a founding father and slave owner, said when referring to the unchecked evil of slavery, “Providence punishes national sins by national calamities.” The Civil War and ongoing racial injustices and the responses to them have proved Mason correct. The unquestioned use of drones to hunt and kill people the world over, may, in time, be seen as another of America’s national sins that resulted in a profound and lasting blowback.

Michael Horton is a foreign policy analyst who has written for numerous publications, including Intelligence Review, West Point CTC Sentinel, The Economist, The American Conservative, and the Christian Science Monitor.