Why America Must Build the Space Launch System 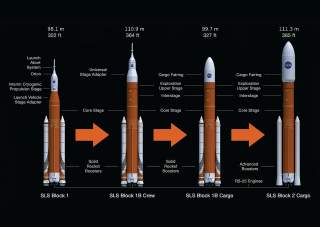 The National Aeronautics and Space Agency (NASA) plans to debut SLS in 2020. SLS “will be the most powerful rocket in history, and the only one designed explicitly to support deep space exploration,” historian and commentator Nicholas Waddy has noted. Projected missions include a historic Mars expedition.

Waddy noted that America’s “next great journey in space, some would say, will come not on NASA’s dime, but courtesy of private initiatives.” However, he and others have warned against reliance on corporations like Elon Musk’s SpaceX. Various problems like funding difficulties have called into question whether SpaceX can do more than the “occasional stunt in deep space.” The Mitchell Institute for Aerospace Studies’ Peter Huessy also has worried about America putting “all our space eggs in the billionaire basket” without an independent national space launch capability.

SLS additionally possesses significant technical advantages over SpaceX’s Falcon Heavy rocket, former Senate Republican space and aeronautics adviser Jeff M. Bingham has noted. No “other existing rocket comes close to the capabilities of SLS for Deep Space missions,” particularly given that Falcon Heavy is not designed for human transport. Thus unlike SLS, Falcon Heavy does not have the “rigorous engineering needed when human lives are at stake.”

The SLS’ size avoids “smaller elements that must then be assembled in space” and thus enables “reduced chance of error and difficulty with assembly.” Former NASA Administrator Michael Griffin has added that the capacious SLS “drives down cost by reducing the number of missions needed to get a full complement of mission components into space.” SLS cost advantages extend to this powerful rocket’s “faster transit times to deep space locations.”

Size also matters when it comes to national security, as Huessy has noted that “SLS could launch huge clusters of small satellites” and therefore “present our potential foes with a difficult targeting problem.” Weitz has likewise observed that the SLS could “replace an entire constellation of downed or disabled satellites as well as build an entirely new space satellite network in a crisis” or “launch better shielded but heavier armored satellites.” For instance, Huessy has explained that currently “it takes years and multiple launches to put a constellation such as GPS [Global Positioning System] into operation.”

The security stakes for America and the wider world in space could not be higher, as former the United States Air Force officer and aerospace and defense executive Brian Morra has highlighted. Space conflict's "consequences on our twenty-first-century economy and day-to-day life would be devastating." The "ability to deter conflict in space and to prepare to fight and win a war in space should deterrence fail."

Current speculations about space wars are particularly troubling given predictions that “China is well on its way to becoming a space superpower,” including possible Chinese interests in SLS-like rockets for military applications. As the Heritage Foundation China expert Dean Cheng testified before Babin, America and China are competing to "exploit space in support of national security objectives." Yet in this "asymmetric situation," the "United States is far more reliant on space to conduct military operations than" China.

China seeks other strategic gains from its burgeoning space program, noted Cheng’s fellow expert witnesses. U.S.-China Economic and Security Review Commission Chairman Dennis C. Shea observed that “space will play a role in China’s foreign policy toolbox” as China offers assistance to other countries’ space explorations. Center for Strategic and International Studies scholar James A. Lewis similarly noted global perceptions of an ideological competition between America and China, somewhat analogous to the time of the Soviet-American “space race.” “Human spaceflight was an important part of the Cold War contest, proving that market democracies could surpass scientific socialism” in a race to the moon, and America should not concede any such competition with China today.

Some Chinese officials have also considered a space program’s technological “spillover benefits,” thinking that parallels the analysis of political commentator David Goldman. Goldman has called for a John F. “Kennedy-style Moonshot or a Reagan-style Strategic Defensive Initiative to revive our high-tech industries.” He has examined that research and development or “R&D programs are not only essential to national security but can also become a critical driver of innovation and economic growth.”

“America’s drive to win the Cold War,” Goldman has recalled, produced “all the technologies that have defined the economy of the past thirty years” like cheap computer technology. This experience demonstrated that defense and aerospace R&D is more likely to create “fundamental breakthroughs” in science than private sector R&D. “‘Long ball’ R&D typically involves strategic objectives, while private R&D focuses on ‘small ball’ requirements with specific product goals in sight,” he explained.

Goldman has admonished that federal R&D spending has dropped to barely half the 1978 Gross Domestic Product (GDP) level. Such neglect ignores that only determined efforts preserved America’s “touch-and-go” Cold War technological lead over the Soviet Union even as China’s modern technological prowess surges. Concerning American technological edges in areas like stealth aircraft today, the “consensus view is that Russia cannot defeat stealth yet, but they may be able to do so in the not too distant future.”

As in the past, reaching for the stars offers America down to earth advantages. Homeland security must include space's final frontier, and America dare not lose commanding technological heights to dangerous competitors like China. American greatness demands SLS' deployment.

Andrew E. Harrod holds a Ph.D. from the Fletcher School of Law and Diplomacy and a JD from the George Washington University Law School and is admitted to the Virginia State Bar. He has authored over 450 articles in print and online at outlets like the Algemeiner, American Spectator, American Thinker, Breitbart, the Investigative Project on Terrorism, Jihad Watch, and the Washington Times. He is a Middle East Campus Watch Fellow and a fellow with the Lawfare Project and can be followed online at @AEHarrod.