Why America Needs to Forget Nation Building In Afghanistan 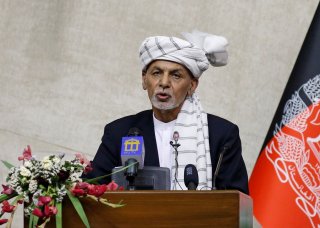 America’s endless war in Afghanistan seems to be nearing its end. According to one official in the Biden Administration, “the withdrawal is over, for all intents and purposes.” In the past two decades, the United States launched military interventions in Afghanistan, Iraq, Libya, and Syria—often without congressional authorization—and engaged in “nation-building” in order to transform tyrannical regimes into democracies. The U.S. government is no longer tasked with merely ensuring American national security, but also rebuilding occupied nations.

While counter-terrorism operations may have been necessary to ensure the national security of the United States, Washington’s commitments to turn these countries into democracies have failed. This should not be surprising. The idea of waging war in another country to transform its political system is erroneous as far as adherence to the idea of limited government is concerned, something America’s Founding Fathers recognized. Nation-building is a kind of utopianism that runs counter to the idea of limited government. It is a fundamental misconception, for many people still cannot trust the government to undertake a basic healthcare reform, let alone create a new government or nation.

As Matthew Spalding of the Heritage Foundation writes, “the Founders were acutely aware of the difficulties involved in advancing the cause of liberty,” basing their hopes on what James Madison called “that honorable determination which animates every votary of freedom to rest all our political experiments on the capacity of mankind for self-government.” As Spalding notes, “liberty” is not merely about regular elections, but also stable democratic institutions upholding the rule of law and individual rights and liberties.

The problem with America’s foreign policy, exemplified by its failures in Afghanistan, is that the idea of limited government does not extend to foreign policymaking. As Louis Henkin, an international law and foreign policy scholar, wrote in Foreign Affairs, according to the original meaning of the Constitution and the intent of the framers, “the president is the commander in chief of the armed forces, but it is Congress that decides what forces he shall command, whether the United States shall go to war, whether the arms and armies of the United States shall otherwise be deployed, and, if so, where and for what purpose.”

However, in spite of the fact that the Constitution places explicit limits on presidential foreign policy authority, congressional war powers have been eroded, and presidents now play an outsized role in formulating, executing, and directing U.S. foreign policy. The constitutional restrictions on executive authority in domestic affairs prevent the concentration of power in the hands of the federal government, which is bound to create room for abuse and misdirected decisions—but this is not the case in foreign policy.

The concept of limited government is based on the idea that the government, consisting of people, is fallible and is prone to mistakes. Humans are fundamentally incapable of grasping the infinite complexity of social reality and the innumerable interrelationships that exist in it, and we cannot create new states or institutions quickly and from the top without bringing substantial damage. What we instead need is “incremental changes, successfully validated by the usage of the many rather than the planning of the few,” as Thomas Sowell put it in A Conflict of Visions—processes that synthesize the experiences of the many, embodied in traditions and institutions and relying on systemic—rather than individual—rationality and wisdom.

Following the quick overthrow of the Taliban government, successive presidential administrations sought to create a new, democratic order to replace the tyrannical Taliban regime. But democratic institutions cannot be created overnight; they are the product of decades of careful work and reflect the attitude and consensus of the citizens. George Bush’s administration “oversaw a new Constitution that wholly reimagined the Afghan state, once decentralized but stable for generations, into a super-centralized presidency meant to rule every corner of Afghanistan directly from Kabul,” according to an article in The New York Times. This is why most efforts at democratizing Afghanistan failed. For as Henry Kissinger remarked in his book World Order, “traditionally, Afghanistan has been less a state in the conventional sense than a geographic expression for an area never brought under the consistent administration of any single authority.”

One of the key challenges policymakers face is the inability to precisely estimate the consequences of their decisions—the consequence of our limited understanding of complex social reality. For example, the 2003 invasion of Iraq bolstered Iran’s geopolitical influence in the region and provided a breeding ground for terrorists. The costs of large-scale government actions, such as military interventions and the overthrow of dictators, often exceed their benefits as they may lead to unintended consequences. This is why we should oppose big-scale policy changes since they will likely have negative unforeseen impacts.

It is true that in the past, some American military interventions were successful. Most notably, in the wake of the Second World War, America’s former enemies, such as Nazi Germany and Imperial Japan, were transformed into thriving democracies and became Washington’s most important allies during the Cold War. However, the successes of these interventions do not imply that regime change-based foreign policy should be pursued, not least because of the enormous costs of such efforts.

The reconstruction of Japan was successful because, unlike in Afghanistan, key elements of local political institutions were maintained and not dismantled. In effect, this was not a regime change but rather the transformation of existing state structures. For example, Emperor Hirohito was not deposed and continued as head of state until his death. Japan’s national bureaucracy remained as well. Likewise, in post-war Germany, “U.S. policy focused on a “grassroots” approach, designed to build a German civil society from the bottom up,” according to a report by the Rand Corporation. In Afghanistan, Iraq, and Libya, meanwhile, democracy was imposed rather than built on the basis of existing state institutions—in spite of the fact that none of these countries, unlike Germany or Japan, had any experience with democratic institutions in their histories.

The government cannot—and should not—make decisions that affect the lives of so many people, both at home and abroad. Ending the Afghanistan war does not mean that America should abandon its responsibilities to the country and defend its national interests. America should do its best to prevent the Taliban from reneging on its agreement not to provide a safe haven for terrorist groups like Al Qaeda, help Afghans whose lives are at risk because of the withdrawal of U.S. troops, and seek to preserve the remnants of democracy in Afghanistan.

America should promote democracy through its soft power rather than military force. The January 6 storming of the Capitol, the raging coronavirus pandemic, an economic crisis, and toxic culture wars—exacerbated by political polarization—have undermined the credibility of the American model of democratic republic. America must increase the international appeal of the democratic model, which is especially important in the age of ideological competition with resurgent authoritarian China — and this means perfecting democracy at home rather than imposing it on others.