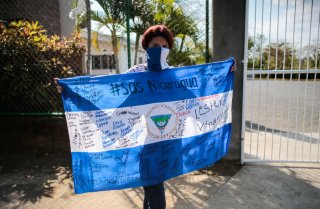 In the wake of the COVID-19 outbreak, having a trade agreement in place is more critical than ever before. According to a study of latest U.S. Census Bureau data, “Nicaragua’s trade with the United States rose to $822.9 million through the first two months of 2020.” Besides the evident increase in trade, U.S. multinational companies such as Kimberly Clark—promoting brands like Kleenex and Huggies—depend on the Dominican Republic-Central America Free Trade Agreement (CAFTA-DR) to supply toilet paper, face masks, and other medical supplies to the Nicaraguan people at affordable prices during the Coronavirus pandemic.

If the Trump administration follows through on its threat to block Nicaragua from the trade agreement, it will be more difficult for companies to deliver needed supplies.

Early this year, in his State of the Union address, President Trump committed to help restore democracy in Nicaragua. However, his plan to modify the CAFTA-DR agreement to exclude Nicaragua will only discourage democratic ends. The Trump administration has been considering a modification in the wake of Nicaragua’s socio-political upheaval. Despite the rapid deterioration of democracy in Nicaragua and its failure to protect human rights, the Central American republic should not be excluded from the agreement because of economic, national security, and immigration reasons.

Why are some in the administration considering Nicaragua’s removal from CAFTA-DR in the first place?

In April 2018, the Ortega regime introduced changes to the country’s social security program, which unleashed a wave of violent protests. The protesters blocked roadways, disrupting commerce. While the social security reforms ignited the protests, these manifestations were only symptoms of a greater discontent—the major encroachment on Nicaraguans’ liberties through the concentration of power under Ortega’s regime.

In 2007, Ortega regained control of Nicaragua after more than fifteen years of conservative and liberal leaders. This time, Ortega counted on the support of international financial institutions and Venezuela’s Chavista government. This support allowed Nicaragua to become economically stable.

According to Richard E. Feinberg from the Brookings Institution, “President Ortega used those economic resources to gradually capture or suppress—one by one—many of the nation’s political institutions, eroding institutional checks and balances.” Furthermore, a recent report released by the Organization of American States (OAS) listed numerous instances of human-rights violations, including political persecution. For example, Ortega’s administration threatened to throw a political prisoner into the Masaya Volcano. Nevertheless, Nicaragua should not be excluded from the CAFTA-DR agreement for three reasons.

First, CAFTA-DR has benefited large and small businesses in both the United States and Nicaragua. The U.S. entrepreneurs who depend on Nicaraguan products will be heavily impacted by a potential rise in tariffs. Coffee is one of the largest Nicaraguan commodities exported to the United States. In 2018, Nicaragua sold $251 million worth of coffee to the United States, becoming its seventh largest coffee export partner.

Café Integral, a boutique coffee shop with cafés in Manhattan, Chicago, and Los Angeles, takes pride in revealing that its coffee beans come from a farm in the mountains of Nicaragua. Excluding the largest Central American republic from the trade agreement will only lead to increased barriers for U.S. businesses. Because small businesses like Café Integral will be subject to higher tariffs, some may have to shut down, following the same path of many U.S. Steel companies amid the trade war between China and the United States. In addition, having a trade agreement in place has significantly bolstered economic growth in Nicaragua which reduces poverty. This growth has been accompanied with a 0.7 percent reduction of extreme poverty.

Second, removing Nicaragua from CAFTA-DR will only open the door to influence from Russia and China. China has already increased the import of Nicaraguan products substantially even though Nicaragua does not hold diplomatic relations with China. China has become Nicaragua’s second largest export partner. In 2013, Ortega granted rights to a Chinese investment company to construct a shipping canal. Although the project is in its infancy, Ortega continually mentions it in his speeches. Russia has also set eyes on Central America.

As Mary O’Grady writes, “[Russia] has a large and secretive satellite compound at the edge of the Nejapa lagoon on the outskirts of Managua, and its Interior Ministry has a large ‘police training center’ in Nicaragua's capital.” Nicaragua and Russia have had a close relationship since the 1980s. Having more influence from authoritarian regimes will contribute with the deterioration of democracy in Nicaragua since both China and Russia will support Ortega’s reign of terror and consecutive terms.

Third, before the violent protests in 2018, Nicaragua was considered one of the safest countries in Central America. Contrary to its northern neighbors—Honduras, El Salvador, and Guatemala—Nicaragua’s immigration influx was not overwhelmingly high. However, given the political and economic instability faced by many Nicaraguans, people are risking their lives to flee the country. If the United States blocks Nicaragua from CAFTA-DR, trade-related employment opportunities will disappear. According to former U.S. ambassador to Nicaragua, Arturo Cruz, CAFTA-DR creates about 125,000 jobs, which sustain more than half a million Nicaraguans and their families. The exclusion of Nicaragua would worsen Nicaragua’s socio-political conditions, forcing more Nicaraguans to immigrate to Costa Rica and the United States.

As the United States evaluates the possibility of blocking Nicaragua from CAFTA-DR, U.S. officials should not overlook the implications. Keeping Nicaragua in CAFTA-DR will help stabilize the immigration exodus in Central America, ensure the delivery of supplies during the COVID-19 crisis, and prevent U.S. adversaries from taking a leading role in the region.