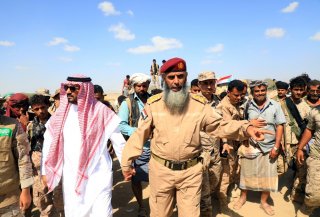 In 2017, Congress passed historic reforms to modernize and streamline the U.S. government’s approach to security cooperation—how the United States funds, trains, and equips foreign militaries and police forces around the world.

In the two decades since 9/11, the United States has increasingly sought to build capacity in foreign security forces in an effort to combat threats before they reach the United States. These programs, funded by the departments of Defense and State, continue to increase in scope and cost, but without a clear, overarching strategic framework. The 2017 reforms helped to increase oversight over the U.S. government’s security cooperation efforts and began the process of measuring their impact. This was a small step in the right direction.

But despite those efforts, the world of security cooperation remains persistently opaque. Public reporting on things like deliveries of arms sold by the U.S. government to foreign partners, proposed commercial arms transfers, and detailed breakdowns of the military aid and training provided to foreign security services across the globe remain troublingly scarce. Regulatory changes, like the removal of certain firearms from the U.S. munitions list, have also undermined congressional oversight regimes, eroding key safeguards in the American security cooperation enterprise that are meant to ensure arms transfers align with U.S. values and interests.

Security cooperation is a risky business. In just the last month, reports have illustrated how foreign military training has implicated the U.S. in two of the most high-profile assassinations of the past decade—the murders of Washington Post columnist and Saudi dissident Jamal Khashoggi and Haitian President Jovenel Moïse. Indeed, around the globe, U.S. arms transfers and security assistance have too frequently enabled human rights abuses or contributed to insecurity and instability, whether that’s the war in Yemen, the crackdown of dissidents in Egypt, or the violent “war on drugs” in the Philippines.

In a world where the risks are so high, transparency and public engagement offer indispensable mechanisms for encouraging restraint and responsibility. The availability of existing information on security assistance and arms sales has allowed the public and their representatives in Congress to place political weight behind refraining from sales to certain foreign partners while enabling researchers and academics to assess the consequences of security cooperation. Besides that, the added layer of public accountability creates an added incentive for responsible security cooperation that adheres to American values and objectives.

After all, it was only due to public pressure that the U.S. government finally relented somewhat on its support for Saudi offensive operations in Yemen. It was only due to media engagement that the public learned of U.S. plans to supply Israel with new weapons in the midst of its campaign in Gaza earlier this year. It was only due to intrepid reporters that we learned of the role of American companies in training the killers of Jamal Khashoggi and President Moïse. And these are only the stories we do know.

We also need more transparency to understand what we still don’t know. As deliberation continues over the current National Defense Authorization Act (NDAA), beyond debating the size of the budget, Congress also has an opportunity to build on the 2017 reforms by making security assistance more transparent and accountable through better public reporting, including detailed yearly reporting of U.S. security assistance and cooperation.

Representative Tom Malinowski, who previously served as Assistant Secretary of State for the Bureau of Democracy, Human Rights, and Labor, understands these challenges only too well. His amendment to last year’s NDAA—the Protecting Security Assistance from Corruption Act—increases transparency for security assistance and arms sales through simple reporting requirements, ensuring the departments of Defense and State are doing minimal risk assessments to ensure security assistance isn’t contributing to corruption in partner countries. A renewed push to insert these provisions into the NDAA would be a critical effort deserving of support on both sides of the political aisle.

Representative Gerry Connolly (D-VA) has also been working toward more transparency. As the congressional office that represented Washington Post reporter Jamal Khashoggi, Congressman Connolly has been working on tracking whether anyone trained by the U.S. later goes on to commit human rights abuses. Connolly also introduced the Protection of Saudi Dissidents Act, which passed one chamber of Congress and is still pending in the Senate.

Security cooperation and arms sales between the United States and other countries continue to grow, but due to the scarcity of public information, civil society and even Congress are only seeing a fraction of the picture. This should be a deep concern, given how security assistance and arms sales impact foreign policy around the world. We hope this year’s NDAA can take another step toward redressing that.

Lauren Woods is the director and Elias Yousif is the deputy director of the Security Assistance Monitor (SAM) at the Center for International Policy. The Security Assistance Monitor provides the most comprehensive public information available on U.S. security assistance, arms sales, and foreign military training. They tweet @LDWoods3 and @EliasDJyousif.