This Is Why America's Black Friday Sales Are So Chaotic 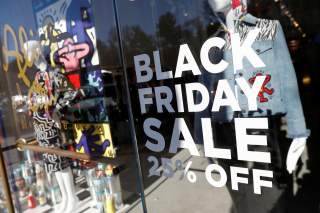 The manic nature of Black Friday has often led shoppers to engage in fistfights and other misbehavior in their desperation to snatch up the last ultra-discounted television, computer or pair of pants. What is it about the day after Thanksgiving, historically one of the busiest shopping days of the year and traditionally the start of the holiday season, that inspires consumers to misbehave?

The unique characteristics of Black Friday sales promotions and the frantic retail environment they create, coupled with the shoppers’ own physical and emotional states combine to loosen the emotional constraints. Retailers heavily promote their most desirable items at deeply discounted prices in order to encourage more foot traffic. Demand for those precious few items naturally exceeds supply, and that imbalance can lead to aggressive consumer behavior.

But another key ingredient results from the very timing of the sales, which may begin at midnight or early in the morning and require eager customers to camp outside a store all night: sleep deprivation. That means many Black Friday shoppers’ cognitive levels are not functioning at top form, resulting in impaired decision-making and heightened negative mood states, thus facilitating misbehavior.

Research several colleagues and I conducted to identify what are the causes of consumer misbehavior on Black Friday focused on two situational variables: crowding and unpleasant behavior of fellow shoppers (that is, behaving rudely and arguing). Both variables are implicated whenever Black Friday miscreants make it into the press.

Crowding can be good – or bad

On the whole, the large crowds that congregate on Black Friday had positive effects on consumer behavior, reducing dissatisfaction and aggression and thus errant activity as well, according to our study. When consumers are expecting it, the negative impact is mild. All it takes is one bad seed, however; the unpleasant behavior of some shoppers can ruin the experience for others and interfere with their efforts to obtain a desired item. Being unable to purchase the advertised product strikes them as unfair, and this perception of inequity frequently leads to misbehavior.

This suggests that shops shouldn’t ignore or accommodate naughty customers. Rather, they need to take proactive actions, such as clearly communicating store policy about misbehaving customers, and be prepared to react immediately to signs of aggression, like removing or ejecting such shoppers.

Retailers could also better curb misbehavior by simply monitoring behavior before customers even enter the premises. For example, if shoppers assume the pushing and shoving outside of a store’s doors is caused by unpleasant fellow customers, they are likely to think there’s some unfairness going on, leading to more misbehavior.

On the other hand, if customers believe the reason for misbehavior is due to overcrowding, they are less likely to perceive inequity and misbehave. Posting signs at entrances or in advertisements reminding shoppers to bear with Black Friday’s crowded conditions may help keep customers civil.

Cutting down on retail rage

In general, reducing the number of unpleasant customers would improve the shopping experience for other shoppers as well as for store employees, and reduce bad behavior. Some steps retailers could take to do this include adding checkout lanes to speed up traffic and putting more employees on the sales floor to improve responsiveness to shopper concerns.

For retailers, Black Friday is meant explicitly to attract these large crowds in hopes of ringing in more sales – hence the original meaning for the day, when companies become profitable for the year or moved into the black. But besides leading to misbehavior, more people jostling over a small number of deeply discounted items can lead to also adds to injuries or even wrongful death lawsuits. Retailers need to balance making more money and the safety of their customers and workers.

Ultimately, customers are responsible for their own behavior. When shoppers behave responsibly, the Black Friday experience isn’t spoiled for their fellow customers and everyone is able to buy their digital goods and clothes in safe and relatively stree-free environment.