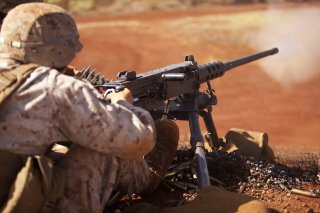 The historic .50-Cal was first tested by the Army in 1918. The M2 was designed in response to both German 13mm anti-tank rifles being fielded and the thicker enemy armor appearing on the battlefield in Europe, an Army report stated.

The Army is revving up development and delivery of advanced targeting technology for its .50-cal machine gun to increase precision, widen the mission envelope and destroy challenging targets such as enemy drones, low-flying aircraft, light-skinned armored vehicles and troop concentrations. .

In service for decades, the .50-Cal has naturally been thought of as largely an area weapon able to lay down suppressive fire, enabling troops to maneuver by blanketing enemy targets with rounds. The weapon of course still has this function, yet technical efforts are underway to make .50-Cal targeting more precise, such that it could shoot down swarms of quadcopters or other commercially avail mini-drones configured for attack.

Precision-guided weaponry, such as JDAMs from the air, have been operational for decades. GPS-guided land weapons such as Excalibur 155m artillery rounds or the larger GMLRS, Guided Multiple-Launch Rocket Systems, have been in combat since 2007 and 2008; engineering comparable guidance for smaller rounds, naturally, is a much more challenging task.

Non-Kinetic EW approaches have been used effectively to jam signals of ISIS drones by the Army and Air Force; Senior Army officials explained that these tactics would be supplemented by emerging kinetic options as well.

Various technical efforts to engineer precision guidance for the .50-Cal have been in development for several years. In 2015, a DARPA program called Accuracy Tasked Ordnance (EXACTO) demonstrated self-steering bullets to increase hit rates for difficult, long-distance shots. DARPA's website, which includes a video of a live-fire demonstration of the technology, states that EXACTO rounds maneuver in flight to hit targets that are moving and accelerating.

Laser rangefinding technology is a key element of EXACTO in order to accommodate for fast-changing factors such as wind and target movement; since the speed of light is a known entity, and the time of travel of a round can also be determined, a computer algorithm can then determine the exact distance of a target and guide rounds precisely to a target.

Elements of the fast-tracked counter-drone effort, with respect to forward base protection, involves collaboration between the Army's Rapid Equipping Force and the service's program of record Forward Operating Base protective weapon -Counter-Rocket Artillery and Mortar (C-RAM).

The historic .50-Cal was first tested by the Army in 1918. The M2 was designed in response to both German 13mm anti-tank rifles being fielded and the thicker enemy armor appearing on the battlefield in Europe, an Army report stated.

After a number of tests, the M2 entered service in 1923 as the M1921. It is a scaled-up version of an older Browning design, the M1917 .30 cal water-cooled machine gun, and, like its predecessor, early variants of the M2 were also water-cooled. Since its first induction, the M2 has undergone a few changes, although the basic action of the weapon system has remained the same.

Sig Sauer P226: The Navy's SEALs' Gun of Choice (Soon to Be Replaced By Glock)