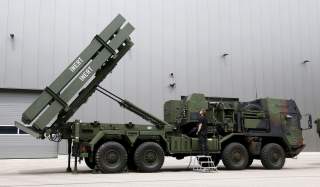 Key point: Washington needs to keep changing and improving its defenses against a nuclear attack.

The world's nuclear arsenal is growing ever larger, and with real threats of attack from a rogue nation on our homeland, it's not the right time to let down our guard on missile defense capability. The current Administration has wisely and consistently requested increased budgets for Department of Defense spending to maintain the missile defense systems we currently have deployed as well as bolster new technologies. The U.S. already has a highly capable and technologically advanced system, and we should do more to keep a step ahead of threats. In fact, during his remarks on a visit to the Pentagon earlier this year for the rollout of the 2019 Missile Defense Review, President Trump highlighted the top priority of defending the U.S. Homeland:

“First, we will prioritize the defense of the American people above all else. Our review calls for 20 new ground-based interceptors at Fort Greely, Alaska, and new radars and sensors to immediately detect foreign missiles launched against our great nation. We are committed to establishing a missile defense program that can shield every city in the United States.”

The 20 additional interceptors mentioned by the President were mandated by Congress and necessary to hedge against increasing threat developments. In his testimony before Congress, the NORTHCOM Commander, Gen. Terrence O’Shaughnessy, indicated his confidence in the system but recognized that the threat does not stand still; nor should the capabilities delivered to the Warfighter to defend our nation:

“I am confident in the ability of the Ground-based Midcourse Defense System to defend the United States against ICBMs fired from North Korea or Iran, if Iran develops an ICBM, but that confidence is contingent on our continued pursuit of system-wide enhancements to outpace our adversaries’ rapid technological advancements.”

Meanwhile, former NASA Administrator and current Under Secretary of Defense for Research and Engineering Michael Griffin is working on a "Next Generation Interceptor" concept to replace the Ground-Based Interceptor currently fielded in Alaska and California. Reports indicate that while this new concept for an interceptor is conceived to address threats anticipated in 2030 and beyond, it will not be ready on the missile fields until 2030, assuming the full support of Congress and future Administrations. That leaves a minimum of more than a decade with a diminished capability to protect the homeland. That is too long to go without an interim, near-term solution to fill that gap and provide the warfighters with what they need most, more capable, and a great number of arrows in the quiver.

These events concern many in the Warfighting community as well as our elected officials. Senator Dan Sullivan (Alaska) recently raised this issue during the confirmation hearing for Admiral Charles Richard to head up the U.S. Strategic Command. Sen. Sullivan shared concerns that the Next Generation Interceptor may be too ambitious and late-arriving for threats the Warfighter faces today. Then-Vice Admiral Richard responded:

“We need to be very careful about setting too high a bar in our effort to develop any system such that it delays us. We used to move faster in history and be willing to accept some failure and learning along the way. And I am supportive of our ability to get back to that pace.”

I applaud this statement from ADM Richard and the sensibility behind it. Perfect must not be the enemy of good. Warfighters desire the best possible capability to defeat the threats they face today and in the near-term. If we shoot for the moon and miss with the Next Generation Interceptor concept, our decades-long vision of defending the homeland from adversary's missiles will be at risk. Accordingly, a near-term option must be identified and quickly funded and fielded to ensure there is no gap in capability nor an unrecoverable decline in the reliability of the current system. The Nation requires both a near-term solution and the capability to defeat the threats in 2030 and beyond. The defense of the Nation must not rely on one or the other. The Citizens of our great Nation expect and deserve no less.