Why Are Russian Bombers Over Belarus? 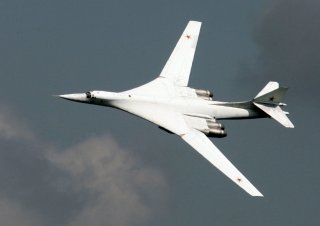 After the collapse of the Soviet Union nearly three decades ago, Russia tried to maintain control over the post-Soviet space with its creation of the Commonwealth of Independent States. Many of the former Soviet Republics drifted away from Russia, yet Belarus has been among the few Soviet states that have remained strategically aligned with the Russian Federation.

While there have been some tensions between the two states in recent years, Russia and Belarus have still maintained close military relations. Russia currently operates several military bases within its neighbor’s borders, and on Thursday a pair of Russian Tu-160 strategic missile-carrying bombers conducted a patrol over Belarus and were even escorted by Su-30SM fighters of the Belarusian Air Force.

“Work continues to practice joint measures by the Air Force and air defense troops of the armed forces of Russia and the Republic of Belarus,” Russia’s Defense Ministry announced in a statement. “On November 11, two Tu-160 strategic missile-carrying bombers of the Russian Aerospace Force conducted a patrol in the airspace of the Republic of Belarus, in which the issues of their fighter support by Su-30SM aircraft of the Belarusian Air Force were practiced.”

The Russian strategic bombers that were escorted by the Belarusian fighters conducted the joint air patrol “for the purposes of ensuring military security of the [Russia-Belarus] Union State and these measures are not aimed against third countries,” the ministry added

The military pilots reportedly demonstrated impeccable flight skills, while the patrol further “showed a high level of interoperability of the Russian and Belarusian crews throughout the flight.”

The flight lasted 4 hours and 36 minutes, and the strategic bombers covered a distance of over 3,000 km. All the aircraft returned to their home airfields.

“These activities have been performed in order to ensure the military security of the Union State and are not directed against other countries,” the Russian ministry added.

The Tu-160 “White Swan” (NATO reporting name “Blackjack”) is a legacy airframe dating back to the Cold War. It remains the fastest as well as the largest and heaviest bomber ever built. The Tu-160 was also the only Soviet-designed bomber designed not to carry any defensive weapons, which is why it is routinely escorted in patrol missions by fighter aircraft such as the Su-30SM.

Additionally, while the White Swan may be outwardly similar to the American Rockwell B-1 Lancer, which actually spurred the development of the Soviet-designed aircraft, it operates quite differently. Whereas the B-1 is a bomber in the classical sense—meaning it flies to targets to deploy its bomb load—the Tu-160 can operate as a stand-off weapons platform, where missiles are launched from bomb bay doors. After which, the “White Swan” would speed off at Mach 2+.

The four-and-a-half-hour flight on Thursday was also essentially a quick jaunt for the long-range bomber, which holds the record for longest non-stop flight for the aircraft. That occurred in September 2020, when two crews onboard a Tu-160 were in the air for more than twenty-five hours and covered a distance of more than 20,000 kilometers.