Why Are Tanks Called Tanks? Just Ask the British 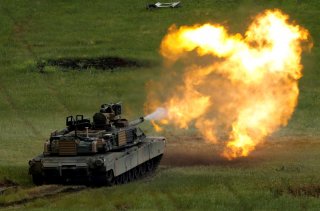 In German it is the "panzer," in French it is the "char d'assaut," but in English, we know it is as the "tank." Yet even after more than 100 years since military "tanks" first entered service, this—at least from a linguistic point of view—is somewhat confusing. Why are tanks called tanks?

The German word "panzer" doesn't actually translate to tank, but rather the word means "armor," as it derives from the French word "pancier" for "breastplate" and comes from the Latin "pantx" or "belly."

Today, Panzer is a loanword, notably in the context of the German military. But it is a bit more confusing because the first German "tank" was the Sturmpanzerwagen (Armored assault vehicle) A7V. Later German tanks were known as "Panzerkampfwagen" or roughly "armored combat vehicle." Leave it to the Germans to be direct and to the point.

Meanwhile the French term "char d'assaut" at least suggests an assault vehicle, but then "char" is essentially the word for tank. The British and French were allies during the First World when the "tank" was developed.

In 1915, the British military at the behest of then-First Lord of the Admiralty Winston Churchill, established the Landships Committee, which was composed mainly of naval officers, politicians and engineers.

The goal of this small committee first was to oversee the development of large wheeled "landships" that were estimated to weigh as much as 300 tons and could roll over any terrain. The project was ambitious, to say the least, but it soon became apparent that the costs, complexity, and logistics of creating such a vehicle were utterly unrealistic, especially in wartime.

Instead, the decision was to go with a smaller vehicle that could pave the way for the infantry to break through the enemy lines. Throughout the spring and summer the Committee conducted a number of trials with wheeled and tracked vehicles. Then in July 1915, the British War Office became aware of the project and its operations were transferred from the Royal Navy to the British Army, which was actually doing most of the fighting on the Western Front.

Under the Army's direction, the first completed tank prototype was developed and it was dubbed "Little Willie." It is also the oldest surviving individual tank in the world, in part because it was just a prototype and never saw use in combat. Little Willie is now in the collection The Tank Museum in Bovington, England.

Externally Little Willie did serve precursor of the tanks to come, and this included the Mark I, which featured sponsons on the side of the tank instead of the turrets, that would define later tanks. It took more than a year to refine and produce the MkI, but by September 1916 some 150 new armored vehicles had been built at William Foster & Co. of the Lincoln Metropolitan Carriage and Metropolitan Carriage, Wagon & Finance Co. at Wednesbury.

In an effort to hide exactly what the military was building, the vehicles were called "tanks" to suggest a container to transport fresh water to the front. In December 1915, the codeword "tank" was officially adopted, and the Landships Committee officially became the Tank Supply Committee

At the Battle of Flers-Courcelette, during the larger Battle of the Somme, on September 15, 1916, the first tanks rolled into action. Some forty tanks advanced over a mile into enemy lines. However, these lumbering vehicles, which did shock the enemy at first, proved too slow to hold their positions while many bogged down in the mud. It has been argued that military planners simply didn't know how to properly utilize these new machines, and it would take another two years of fighting before the tank had truly proven itself in battle.

But by then the word "tank" was in the modern dictionary. It is "char" in French and "танк" in Russian, all because of the successful effort to fool the German military during the war.