Why Are Two U.S. Marines In Jail in Russia? 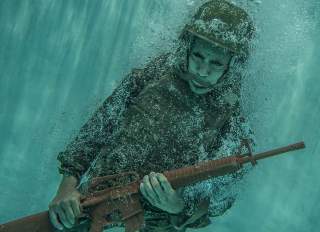 Remember the Leatherneck being held in jail in Russia? Another Marine is facing hard time in a Russian prison.

Former U.S. Marine Trevor Reed, a Texan, aged 28, traveled to Moscow in spring of 2019 in order to study Russian, and to visit his girlfriend, Alina Tsibulnik, who is apparently a Russian national. Reed was honorably discharged from the Marine Corps in 2016, The New York Times reported.

Several months later, in mid-August, Reed and his girlfriend hosted a farewell party, attended by Reed, Tsibulnik, and several of her work colleagues. During the gathering, Reed evidently became rowdy due to heavy intoxication.

Several police officers were called and asked to take Reed to a police station in order to sober up. Officers allege that on the way to the station, Reed became violent.

Reed was detained upon arrival at the station and charged with endangering the lives of the arresting officers who were transporting him. They maintain that Reed became violent en route to the station, elbowing one officer in the ribs and shaking the driver.

By causing the vehicle to swerve, Reed was charged with endangering the officer’s lives, although no traffic accident occurred. According to The New York Times, a conviction could result in up to 10 years in prison.

In an interview with The New York Times, Reed’s father said that his son “is an American citizen who was jailed for something that we don’t believe that he did.” Reed’s father called on the U.S. government to “look at the case closely.”

Parallels have been drawn between Reed’s case and that of Paul N. Whelan, another former Marine who was arrested and charged with espionage.

In December 2018, Whelan attended a wedding party, also in Moscow, and was arrested shortly thereafter. His arrest came in the wake of the arrest of Maria Butina, a Russian national who pleaded guilty to conspiracy to act as an unregistered foreign agent of the Russian state during the 2016 US presidential elections.

Whelan has been held for over a year, despite repeatedly maintaining his innocence. He holds quadruple citizenship, from the United States, Canada, Ireland, and Britain.

He was given a bad-conduct discharge from the Marine Corps in 2008 for “attempted larceny, three specifications of dereliction of duty, making a false official statement, wrongfully using another’s social security number, and ten specifications of making and uttering checks without having sufficient funds in his account.”

Whelan’s arrest is widely considered a political move on the part of the Russian Federation, designed to create a strong negotiating position ahead of a potential prisoner exchange. Reed’s arrest likely strengthens that position.

Reed’s case has ping-ponged through the Russian court system. According to publicly available Russian court information, Reed’s latest case update was a delay due to a failure to appear in court. His next hearing is scheduled for March 23rd.

For now, it seems, both Whelan and Reed will remain behind bars.

Image: Cpl. Randy Soliz, an administration clerk with the 11th Marine Expeditionary Unit dives into the water to shed his gear during an intermediate swim qualification on June 13, 2018. Marines are inherently amphibious by nature and are expected to operate in aquatic environments.