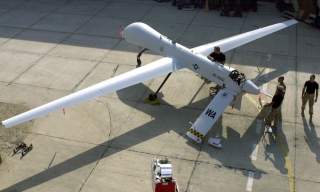 Key point: The CH-4 is roughly similar to the U.S.-made MQ-1 Predator.