Why Arms Control With China Is A Must 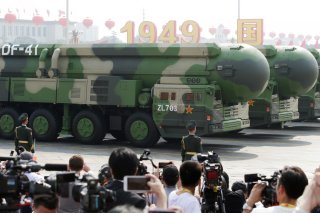 The United States and the world must exert all available political, military, economic, and diplomatic pressure to get China to sign the next iteration of the Strategic Arms Reduction Treaty (START) or other arms control measures. China remains the largest nuclear power without any degree of transparency or treaty-imposed limitations.

The START agreement signed a decade ago between the United States and Russia will expire in February, and the Trump administration wants China to sign.

President Trump advocated the inclusion of China in a nuclear agreement during a phone call with Russian President Vladimir Putin in May and again in July. The president’s top nuclear negotiator Ambassador Marshall Billingslea pressed Russian Deputy Foreign Minister Sergei Ryabkov to exert pressure on China to join the next arms-control treaty.

China remained a big player in the global nuclear competition a decade ago compared with the United States and Russia. That’s about to change.

China plans to double its nuclear arsenal in the next decade, the Pentagon’s 2020 report on Chinese military power said. That would mean an increase from the rumored approximately 200-300 nuclear weapons to 500-600 nuclear weapons. China’s exact number of nuclear weapons is secret due to the Middle Kingdom’s lack of transparency.

The editor-in-chief of the Chinese Communist Party (CCP) controlled tabloid, The Global Times, ran an official op-ed in May advocating for an even greater expansion to 1,000 warheads to counter the United States. It also advocated building additional Dongfeng 41 Intercontinental Ballistic Missiles (ICBM) and Ju Lang Submarine Launched Ballistic Missiles (SLBM) to help achieve that goal. This call likely channeled the sentiments among many in the CCP leadership due to the publication’s closeness to the party.

China has assembled 2,200 mid- and long-range missiles, which START formally has kept Russia from fielding, without constraints.

These developments have Pentagon officials alarmed.

“We are on a trajectory to go to a place that the nation has never been before where we will face two peer nuclear-capable adversaries that have to be deterred differently,” Admiral Charles Richard, commander of the U.S. Strategic Command said last Thursday during testimony before the Senate Armed Services Committee. “We’re on a path by the end of the decade to face two peer nuclear-capable adversaries.

“We’ve never faced that before in our nation’s history.”

Richard argued that policymakers should not treat China’s nuclear threat differently than that from Russia. China has shown increasing evidence that it has pulled away from its vow not to use nuclear weapons first.

China has been the world’s leading nuclear proliferator in recent decades, another reason to demand transparency.

Richard told the Senate panel China’s technical capabilities and competencies more than made up for its smaller nuclear stockpile.

China has embarked on building an enhanced nuclear triad of air-, sea- and land-based nuclear weapons that will directly threaten its neighbors.

This includes its modernized H-6N nuclear-capable refuelable jet bomber with a range of 3,728 miles, which puts U.S. bases in Guam within range and has been used in wargames targeting Taiwan.

China hopes to match U.S. and Russian SLBM competencies by 2035 and to deploy its third generation SLBM by 2025. It tested a JL-3 missile with an estimated range of 7,500 miles last year. This missile likely will carry multiple independently targeted reentry vehicles (MIRV) that will make the JL-3 capable of targeting multiple cities.

On land, China is improving the capabilities of its ICBMs with MIRVs, thus increasing the warheads capable of threatening U.S. cities. The Pentagon noted that China is investigating rail- and silo-based capabilities.

This provides U.S. planners with the impetus to move forward with bipartisan-supported nuclear modernization. This should be used to force China to come to the bargaining table by reminding it of American nuclear supremacy because it only fears military force. Just as China now threatens its neighbors; it must know that its forces on the mainland and at sea face destruction should it attack, thus creating a disincentive to do so.