Why the Army Wants Game-Changing Helicopters 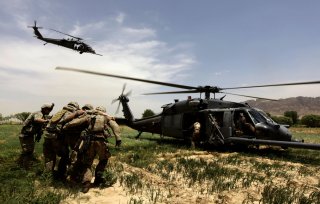 The Army appears to already be flying a new generation of helicopters about twice as fast as a 150 miles-per-hour Black Hawk, breaking new tactical and strategic ground in preparation for warfare in the 2030s.

Upon initial examination, several immediate and widely discussed attributes are “range and speed.” The new FLRAA aircraft, according to both Lockheed-Sikorsky-Boeing and Bell developers, can go twice as fast and twice as far as an existing Black Hawk. This means many things, such as speeds as fast as 300 knots and a combat radius close to 500 kilometers or more, performance parameters expected to change helicopter air war for decades into the future.

In a discussion about FLRAA last year, Brig. Gen. Walter Rugen, director of the FVL Cross-Functional Team told the National Interest that some of the technical breakthroughs with the new helicopter bring substantial new attack capabilities,

“We want the ability to operate the aircraft, conduct near-peer air assaults and show up in places where the enemy does not expect us,” Rugen said in his interview with the National Interest.

One key element among the many innovations likely to inspire much focus is just how can these kinds of massive speed increases be achieved? With fuel efficiency and engine power sufficient to double ranges. This tactical reality completely changes the warfare equation when it comes to an ability to close with an enemy by delivering infantry soldiers, supplies, ammunition or life-saving medical support.

Both Bell and Lockheed-Sikorsky-Boeing designs are considered compound configurations, engineered with an intent to engineer a new platform able to both hover and maneuver like a helicopter, yet also achieve airplane-like range and speed. To accomplish this, Bell’s V-280 Valor relies upon what developers call a new generation of Osprey-like Tiltrotor technology which rotates dual rotors from a horizontal to vertical position depending upon “mode,” and Lockheed-Sikorky’s DEFIANT X brings coaxial rotor system technology to a new level.

“If you think of what a Black Hawk does when inbound to an LZ, then picture a 2030 contested operational environment. We will be flying twice as far and twice as fast but they still have to be very maneuverable in and around the objective area,” Jay Macklin, Sikorsky business development director, Future Vertical Lift, told the National Interest in an interview.

What will this kind of increased combat functionality mean for modern warfare maneuver tactics and Combined Arms Maneuver? Perhaps the angle of descent for a high-speed air assault raid can be much steeper? Perhaps hover positions can quickly shift positions as needed with short bursts of acceleration? Added maneuverability can help the aircraft elude incoming enemy fire and speed up low-altitude fast operations intended to achieve a specific combat effect while minimizing risk.

The U.S. Army Can Only Get So Small