Why Australia's Attack-Class Submarine Program Is in Trouble 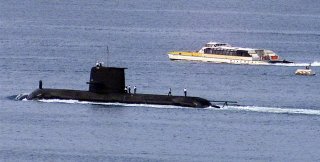 Australia’s strategic circumstances over the next few decades will mean we cannot afford to be without a submarine capability.

But that’s an area in which we are terribly vulnerable. Serious concerns have been raised over both the ability of the future submarine program to produce the Attack-class boats and the time it will take to comprehensively upgrade the Royal Australian Navy’s Collins-class submarines so that we avoid a capability gap.

It’s time to consider the proposal put forward in the new report by Insight Economics, Australia’s future submarine: Do we need a Plan B?, which I launched last week at the National Press Club.

The report, commissioned by Australian businessman Gary Johnston, notes that the Commonwealth opted for the French primary contractor, Naval Group, before the preliminary design was finalised, before the project could be costed and before there was any solid basis to produce a really tough contract. So matters like cost, schedule, performance and Australian industry participation weren’t spelled out. All of those key issues will be resolved between Naval Group and the Commonwealth without the company being under any competitive pressure.

Real problems have already appeared. The outturned cost of the 12 Attack-class submarines has blown out from $50 billion to $80 billion early in the project, and the negotiations for the strategic cooperation agreement took a long time and were clearly acrimonious. Add to that Naval Group’s evident reluctance to commit to Australian content and the nine-month slippage in the very first stages of the design process.

This is the biggest conventional submarine in the world by far and will be very complex to design and build. If the whole process runs on time, the first submarine won’t be in service until the mid-2030s.

The solution set out in the Insight Economics report is for the government to contract the design of an evolved version of the Collins as an alternative to the Attack class.

The two designs would then compete against each another, and the winner would enter a fixed price contract to deliver the boats. This is the proven, successful approach to major projects like this.

There’s no question of abandoning the Attack class at this stage. The aim is to provide competition for it, which the report says can be done for less than $100 million, and without delaying delivery.

The report argues that the lack of competition is the source of many of the program’s emerging risks. And surely any responsible government would adopt this kind of low-cost option to reduce risk once it becomes clear that those risks are otherwise likely to become unmanageably high.

In his comments at the report’s launch, ASPI’s Peter Jennings did the government a great injustice in saying that there is ‘absolutely zero chance’ of it adopting Plan B.

Jennings argued that the problems that have emerged are just routine teething troubles and will soon be sorted out, and that the Attack class is the only boat that can meet Australia’s submarine needs. So, we have no reason to modify the project, and no alternative to do so anyway.

I think both of those arguments are wrong. First, how serious do the problems need to be before the government should take action to head them off? Big changes to major acquisition projects are always painful, so the temptation is to hold off and hope that things will turn out okay, until the evidence to the contrary is absolutely overwhelming.

But we know from long and bitter experience of failure in far too many projects that by the time the problems are beyond doubt, the project is beyond saving. All the ‘lessons learned’ studies agree that the most critical thing in preventing project failure is to act as soon as real problems appear and head them off before they get too big.

Defence is always the last to acknowledge that a project is in danger of failure.

So, my question to people like Jennings who think it’s too soon to take remedial action is, what further evidence are they waiting for? How far will the schedule have to slip, how far will the price have to rise, how far will the Australian content have to fall, before they decide it’s time to act? And how much harder will it then be to salvage the project?

Jennings argues that there’s no alternative because only the Attack class can meet our operational needs. That’s not true. A Collins 2.0 would have the range and capability to operate in and around the South China Sea as well as closer to home. A lot of the work to update the Collins design has already been done by Saab as it bids for a big long-range submarine for the Royal Netherlands Navy.

Indeed, if the Collins 2.0 was fitted with modern batteries, air-independent propulsion and a conventional propeller, it could well perform a lot better than the Attack class with its inefficient pump jet. And there’s every chance it would be a lot cheaper. It would be less technically risky because it would be based on a design we already know well.

No doubt the government is being told by Defence that all’s well with the project and nothing needs to be done. Anyone who’s worked in Defence knows how hard it is for ministers to disregard such advice, but ministers should remember that their predecessors received exactly the same assurances on other projects that went on to fail spectacularly.

The Collins needs a comprehensive life-of-type extension to remain viable while the new submarines are coming into service.

Our submarine capability is vulnerable to delays in the delivery of the new boats or in the completion of the Collins upgrade. There’s a real risk that we’ll end up with a shortfall in the number of boats we have available, either if we find ourselves in a war, or to maintain the current tempo of operations, including the training of crews.

In the longer term, there’s real doubt that the Attack class will do what we need. It’s a very conservative diesel–electric boat with old-fashioned lead–acid batteries and it doesn’t have air-independent propulsion. We may end up with a boat that can’t meet the operational requirements that will be placed on it.

So the other key recommendation in the report is that, over the longer term, we look seriously at moving to nuclear propulsion. And if that is a serious option down the track, we need to start planning for it now, because the challenges involved are immense.

Hugh White is emeritus professor of strategic studies at the Australian National University.