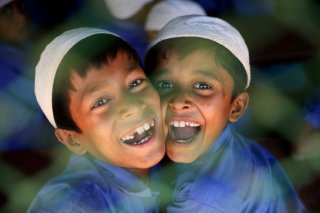 As schools shuttered, universities closed, and millions of students across the United States found themselves under state-mandated “stay-at-home” orders as a result of COVID-19, many have transitioned to online classes.

Students and educators alike have been quick to adapt, utilizing video-conferencing technologies such as Zoom to remotely listen to lectures, participate in classroom discussions, and access educational materials .

But for the half a million Rohingya children who have been languishing in refugee camps in Cox’s Bazar in Bangladesh  that is an impossibility.

In September 2019, Bangladesh authorities cut internet and telecommunications services to the camps, greatly restricting the ability of the more than 1 million refugees who live there to communicate with the outside world.

For nearly two and a half years, the Rohingya youth among the more than 730,000 forced to flee across the Bangladesh border after a brutal military crackdown in Myanmar’s Rakhine State in August 2017 have been systematically denied the right to an education.

As early as 2018, UNICEF — the United Nations (UN) agency charged with protecting the rights of children, sounded the alarm that the prolonged denial of educational instruction in the camps would create a “lost generation” of children.

Yet, the international community did not heed its warning.

In fact, until two months ago, only one-third of Rohingya children were able to access education through temporary learning centers run by international agencies or religious schools that disproportionately exclude women and girls.

Instead of education, for much of the past two and a half years, the efforts of many UN agencies and the Bangladesh government have largely focused on the repatriation of the Rohingya back to Myanmar. These efforts were made despite conditions that were not conducive for repatriations and are in clear violation of international human rights law.

In June 2018, the Myanmar government signed a tripartite memorandum of understanding with two UN agencies — UNDP and UNHCR, establishing that any repatriation of the refugees to Rakhine State would need to occur in a “voluntary, safe, dignified, and sustainable” manner.

However, an armed conflict between the Myanmar military and an ethnic armed group called the Arakan Army in the northern Rakhine State — waged almost continuously since the so-called “clearance” operations began—has prevented any “voluntary, safe, dignified, and sustainable” returns to legitimately occur.

Two repatriation attempts, one in November 2018 and another in August 2019, unsurprisingly, both failed when the refugees refused to go back voluntarily.

It was only then, under the realization that the refugees were likely to remain in the camps for the foreseeable future, that Bangladesh announced in January that it would finally begin to offer schooling and skills training opportunities to Rohingya refugee children. A pilot program, in coordination with UNICEF — planned to launch in April.

Then, mere days before the launch of the program,  a positive case of COVID-19 struck right outside of the camps. This forced the camps to go into lockdown to try and stop the spread.

But the camps are overcrowded, unhygienic, and tightly confined . Moreover, those on the ground at the camps believe that once COVID-19 hits, it will spread like a wildfire.

“The camps inside Bangladesh…have all the conditions to allow transmission of COVID-19 to Rohingya people.” Dr. Anita Schug, co-founder of the Rohingya Medics Organization recently told Anadolu News Agency.

The internet and telecommunications blackout, put in place alongside a series of other draconian restrictions decried by UN Human Rights experts ,  has severely exacerbated the threat of COVID-19.

Information sharing and proper guidance from health officials and international aid agencies is extremely difficult to disseminate, and as a result, misinformation is running rampant in the camps.

The lack of accurate information about the virus has reportedly stirred rumors that anyone who contracts it will be put to death by Bangladesh authorities. And compounding the issue further, refugees in the camps continue to gather in large groups to spread information because there is no other way to effectively communicate — making enforced “social distancing” impossible.

A leaked UN inter-agency memo led by the World Health Organization circulated among diplomats in the country’s capital of Dhaka last week predicts that due to “…the extraordinary human densities in Bangladesh…between half a million up to 2 million” people could die from the COVID-19 outbreak in the country.

Bangladesh, a developing country of more than 165 million people, already lacks the medical capacity to care for all of those who have not contracted COVID-19. Bangladesh authorities should realize, too, that if communications are not restored to the camps, the impact will not be experienced by the Rohingya alone. The economic damage on communities in Southern Bangladesh if COVID-19 were to rapidly spread from the camps would be catastrophic, and perhaps   irreparable.

The United States, in line with human rights groups and the UN, should call on the government of Bangladesh to end the internet and communications blackout in the camps — before education is no long the only thing COVID-19 deprives from the Rohingya.

Sam Baron is an incoming M.Phil Candidate in Politics and International Studies at the University of Cambridge. He previously served on the Myanmar Country Team of the United Nations Office of the High Commissioner for Human Rights (OHCHR).