Why Bernie Sanders Could Lose (No Democratic Party Conspiracy Necessary) 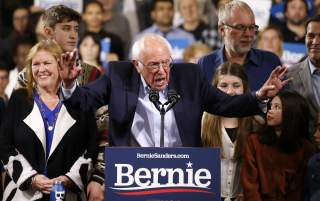 On Monday night, the Establishment came out from hiding and was revealed on a stage in Dallas, Texas to be none others than Beto O’Rourke, Pete Buttigieg, and Sen. Amy Klobuchar. Among them, a former mayor of a town of 100,000, a failed Senate candidate and two unsuccessful presidential candidates, one of whom dropped out three months before any votes were counted.

This high-powered cabal of movers and shakers behind the machinations of global events endorsed Joe Biden for president—an event President Trump called “a coup against Bernie!”

Sen. Sanders, not quite as conspiratorial, but sticking with the message, said, “Why should I be surprised that establishment politicians are coming together?”

This kind of rhetoric about “the establishment” and its heinous agenda to “steal” the election from a guy who, prior to Super Tuesday, had won a total of 58 delegates, is so widespread as to be meaningless. Like how the word “politically correct” came to be synonymous with “liberal,” or how Sen. Ted Cruz, a lawyer with two Ivy League degrees, can accuse his opponents of being “elitists,” these political smears just refer to anything the speaker doesn’t like. Bernie fans have called everything from the appointment of lifelong Democrats like Rep. Barney Frank to the DNC rules committee to endorsements of rivals illegitimate attacks on the sanctity of Bernie’s coronation.

Media figures from both the right and the far-left joined in. Michael Moore said the endorsement party was “clearly obviously intended to try and stop Bernie's momentum,” while Fox News’s contributor Charlie Hurt said, "Democrats are ... doing whatever they can to stop Bernie Sanders.”

If the DNC had a grand scheme to try to throw Iowa to a mayor they’d never heard of before just so that mayor could struggle in the next few states and then eventually use his clout from tying in Iowa to endorse their original favorite, they are way ahead of me on the ninety-dimensional Go board.

It’s not exactly surprising that most mainstream Democrats are not huge fans of Bernie Sanders, a self-proclaimed democratic socialist who is not even a full member of the Democratic party. Buttigieg and Klobuchar were explicit about their disagreements with Sanders, going at it on the debate stage, and O’Rourke proposed an alternative to Medicare for All.

They picked the candidate they liked the most. What exactly is undemocratic about that?

Sanders says that the Democrats should be fighting for the people. At the NBC debate, Sanders said, “I think the will of the people should prevail. The person who has the most votes should become the nominee.”

If you are concerned about such things, you might even say that waiting until after some states have voted and endorsed the candidate who is leading the popular vote is more “democratic” than endorsing before the process has even started, like Rep. Ocasio-Cortez, who endorsed Sanders in October, did.

Now the people will have the change to make their will felt, and, if the results of Super Tuesday are any indication, a lot of them prefer a moderate who will build on the existing system to a self-styled revolutionary who wants to overthrow large parts of it.

As of midnight EST on Super Tuesday, Biden has won four more states than Sanders and more than 100 more delegates. He romped through the South, winning Alabama by over 50 percent, Virginia by 30 percent, North Carolina by close to 20 percent, and Tennessee, Arkansas, and Oklahoma all by over 10 percent. He won Massachusetts, next door to Sanders’ Vermont, by about six points, and Warren finished third in her home state.

The endorsements might have been helpful. FiveThirtyEight only gave Biden a 19 percent shot at winning Minnesota, and the last two polls gave Sanders a 5+ point advantage, but Biden won Amy’s state by 8.

Speaking of “rigged systems,” on the Republican side, the party didn’t even hold votes in Nevada or South Carolina. Of the states that held votes on Super Tuesday, Trump won more than 90 percent in most of them, but he missed that mark in Utah and Vermont, and it will be close in Colorado. In Vermont, Bill Weld had his best Super Tuesday performance, with 10.3 percent of the vote.

Bloomberg has more to be angry about with Biden than Sanders does. Bloomberg said to the press Tuesday morning, “If Joe dropped out [I’d get more votes]. Joe is taking votes away from me.”

Really? Bloomberg struggled to clear the 15 percent hurdle in many states Tuesday. He has about a dozen of the most expensive delegates ever—before California’s delegates are counted—to more than 600 combined for Biden and Sanders. His plan to swoop in as a savior after Biden bungled South Carolina didn’t work. Clearly the system is rigged against billionaires. But if he wanted to stop Sanders, he can’t be too disappointed with the results.

A lot of Sanders voters were angry at the voters, angry at Warren, and cursing the results. Doing anything but ingratiating themselves and their candidate to those who don’t already support him.

Here’s the truth: Most of the party is coalescing. The voters are deciding. Bernie bros can blame it on chemtrails altering voters’ thinking or fluoride in the water or the hypnotic power of former Senate Leader Harry Reid’s voice as he speaks his endorsement into the camera. But if they want to win, they’ve got to take a look at themselves and think about what they can do to expand their base.