Why Bernienomics Is One Giant Disaster 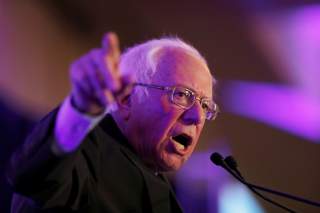 Bernie Sanders is apparently quite the gambler, and it’s odd that the trailing Democratic presidential candidates didn’t use the recent Las Vegas debate to cleverly make that point. If elected America’s 46th president, Sanders would gamble that the exploding debt and deficits caused by his spending plans wouldn’t hurt the economy.

For the moment, let’s take him both seriously and literally. In an interview broadcast on 60 Minutes last night, Sanders was reticent to dig into the numbers. “I can’t rattle off to you every nickel and every dime,” Sanders said when pressed by Anderson Cooper on how much his plans would cost. “But we have accounted for — you — you talked about Medicare for All. We have options out there that will pay for it.”

That’s unclear, at best. While Sanders has outlined several massive tax increases, his spending plans appear even more ambitious. He may have $60 trillion or more worth of “priorities” in mind but far less in terms of revenue raisers. And remember, higher debt and deficits would come at a time when the federal government is already at a historically high level of debt as a share of the economy with even more on its way from entitlement spending. This is the sort of thing the Congressional Budget Office (and still most economists) worries about, particularly if interest rates normalize. But Sanders would be betting on a new normal for as far as the eye can see. Low-interest rates as far as the eye can see. That, no matter how much red ink is flowing in Washington.

Another Sanders gamble is that all his tax hikes and private-sector intervention wouldn’t further slow economic growth further from its already historically low level. He wants to raise as much in taxes from the rich, Wall Street, and corporations as is already raised from the entire personal income tax. All that without conceding any significant burden or disincentive to work, save, or invest. If Sanders is wrong, then the idea that we can simply outgrow rising debt in a low-interest rate environment looks less likely. It also means a less prosperous future with less opportunity and technological progress.

Of course, maybe we should only take Sanders seriously and not literally. Maybe all these plans are merely socialist signaling that Sanders is passionate about his agenda or represent a political calculation to stand out from rivals via crazy big ideas. If Sanders is the next president, voters will also have taken a gamble. Actually, they will have taken three. First, Sanders will try to be serious rather than literal. Second, even his serious agenda won’t batter the economy. And third, markets would help temper his worst excesses.