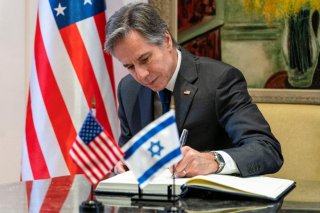 In between dealing with the Ukraine war—the gravest strategic confrontation since the 1962 Cuban Missile Crisis—and supervising the apparently final stages of negotiations to revive the Iranian nuclear agreement, Secretary of State Antony Blinken took time off to speak to the heads of the two most powerful human rights non-governmental organization (NGOs) in the world. And Blinken made sure that the conversations were made public by posting the information on Twitter:

“Spoke today with @HRW’s @KenRoth and @Amnesty’s @AgnesCallamard on human rights challenges, including in Ukraine, Russia, China, and the Middle East. Human rights are central to U.S. foreign policy. We support the important work of human rights defenders.” The link at the bottom goes to a November 2021 generic State Department document.

This cryptic post is the only information provided—it does not explain the apparent urgency of Blinken’s conversations with the two NGO officials, the objectives, or the twitter post. And there is no clue about the content—unusually, Roth’s hyperactive and self-promoting twitter feed made no mention of this conversation. Responding to a journalist’s questions, the State Department refused to comment on the substance of “private discussions.”

Roth and Callamard are not elected officials; NGO officials are only accountable to their major donors, do not represent any democratic constituencies, and do have inherent legitimacy. Their importance comes from their massive budgets—Amnesty’s is €314 million per year, and through Human Rights Watch (HRW), Roth controls $129 million annually, provided by wealthy donors (and often in complete secrecy). Their network of satellite NGOs adds significantly to the overall budgets to pay for an army of public relations specialists, social media influencers, and similar activities that shape the image of NGOs as arbiters of human rights and morality.

HRW and Amnesty have become vehicles for promoting an anti-capitalist, anti-democracy ideology known as post-colonialism, which blames the United States and the West for the world’s ills, and embraces “liberation movements,” dictatorships, and terror organizations under the facades of human rights and international law. For many years, HRW and Amnesty gave violations of human rights by Russia, China and Iran a low profile, while repeatedly condemning American military actions in Afghanistan and Iraq as “war crimes.” In 2009, HRW founder Bob Bernstein published an article in the New York Times denouncing Roth for betraying HRW’s mission “to pry open closed societies, advocate basic freedoms and support dissenters.” Instead, the organization “casts aside its important distinction between open and closed societies,” including leading the effort to “turn Israel into a pariah state.”

Israel and Zionism are major targets of this ideology, recycling Stalinist anti-Semitism and anti-Zionism of Soviet era, as reflected in the infamous 1975 UN Resolution 3379 declaring Zionism to be a form of racism. Roth and Callamard’s obsessive campaigns to demonize Israel by exploiting a bogus form of “apartheid” are continuations of this party line. In the process, they have destroyed the universal foundation of human rights principles and undermined the legitimacy of the UN and other international frameworks dealing with these issues.

Surely Blinken is familiar with this history, which makes his cryptic post extremely problematic. What was the American secretary of state hoping to accomplish by publicly embracing the leaders of these destructive propaganda organizations?

In the absence of any clues, the responses focused on the contradiction (some referred to hypocrisy) between Blinken’s endorsement and the administration’s pledges to firmly oppose “actions that seek to target Israel unfairly.” On February 1, 2022, when Amnesty International launched its most recent apartheid onslaught, State Department spokesperson Ned Price declared “It is important, as the world's only Jewish state, that the Jewish people must not be denied their right to self-determination, and we must ensure there isn't a double standard being applied … I reject the view that Israel's actions constitute apartheid.” In this light, American Jewish Committee leader David Harris referred to the legitimizing of those who “24/7 defame & delegitimize #Israel” as “both troubling & baffling.”

Blinken and State Department officials charged with promoting human rights are undoubtedly aware of the long track records of both NGO superpowers in attacking Israel through the manipulation of human rights. Roth has been doing this for three decades, employing a stream of staffers sharing this objective and veering into blatant anti-Semitism, such as dedicated boycott propagandist Omar Shakir.

The same mixture of demonization and anti-Semitism are also central themes for Amnesty International and Callamard, and their “Israel apartheid” report (February 2022) recycles HRW’s propaganda slogans. A few days before Blinken’s outreach, the head of Amnesty USA, which raises a sizable share of the organization’s overall budget, brought the campaign to the Woman’s National Democratic Club, declaring that Amnesty is “opposed to the idea ... that Israel should be preserved as a state for the Jewish people.” O’Brien even claimed to speak for American Jews, declaring “my gut tells me what Jewish people in this country want.” Among those who condemned his condescending performance were twenty-five Jewish members of the House of Representatives.

For all of these reasons, both the timing and the public announcement of Blinken’s legitimization of Roth and Callamard require an explanation. Optimists might imagine a conversation in which the secretary of state asks for their help in prioritizing Russia and China as leading human rights violators, in contrast to the limited attention they have received from the NGO network until now. In avoiding a direct military confrontation, and in addition to economic sanctions, the Biden administration’s efforts to isolate Vladimir Putin and Russia echo old and blind faith that condemnations of human rights violations are a form of alternative power. However dubious in terms of results, this would at least provide a logical justification.

Last on Blinken’s “challenge” list is the Middle East—which could in theory include the chronic human rights violations in Iran, Syria, Libya, Lebanon, and elsewhere. But in the perverse world of human rights activists, led by HRW and Amnesty, the Middle East is synonymous with Israel, which for the past twenty years and more is presented as the world’s worst violator, and whose very existence is a unique affront to all that is good and decent.

For all these reasons, even if the most charitable explanation for Blinken’s embrace of Roth and Callamard is correct, the moral stain remains. Given their obsessive histories, a shift in priorities according to Blinken’s list of “human rights challenges” in order to free up human rights bandwidth for Vladimir Putin and Xi Jinping seems improbable, and unlikely to make a noticeable difference in the real world.

Instead, HRW and Amnesty will use the endorsement from Biden’s secretary of state to pocket more donor funds and amplify their anti-human rights ideological crusades.

Gerald M. Steinberg is a professor emeritus of political science at Bar-Ilan University and founder of NGO Monitor.