Why Brazil Is Right To Prepare For A Future French Invasion (WHAT?) 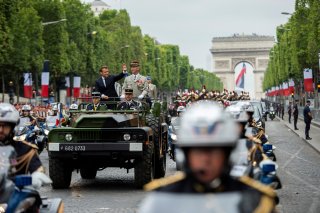 Here's What You Need To Remember: As military adversaries, comparing Brazil to France is like comparing mangoes to French fries. The two simply don’t intersect. Brazil actually has the larger military—almost 350,000-strong—including several infantry brigades trained for jungle warfare.

In 2035, French marines and paratroopers storm Rio de Janeiro, while tanks and infantry invade northern Brazil. These troops are the spearhead of a United Nation military expedition determined to seize the Amazon region and turn it into an international environmental zone.

Is this the latest apocalyptic vision from the Tinfoil Hat Brigade? Has Napoleon risen from the dead?

No, this is actually a scenario that Brazil’s military is planning for.

“The Brazilian military elite views France as a strategic threat to Brazil,” said Brazil’s Folha de Sao Paulo newspaper, which obtained a look at a Brazilian military report. “This stems from France's renewed interest in internationalizing the Amazon.”

But all these scenarios, France is the enemy. In the Amazon invasion, for example, French forces would operate from French Guiana, which shares a 500-mile border with northern Brazil.

Never mind that France has not been a military power in Latin America since the nineteenth century. Current French president Emmanuel Macron suggested in 2019 that the Amazon be internationalized for its own protection, after massive wildfires in the region generated air pollution on a global scale. Logging and cattle ranching are steadily eating away at the Amazon rainforest, leading to fears that the region will no longer function as a global absorber of carbon, which in turn could accelerate global warming.

Not surprisingly, French diplomats in Brazil derided the “limitless imagination” of the study’s authors. France has been Brazil’s “main military partner,” and both nations have enjoyed “a close and friendly relationship for decades, conducting joint operations on a daily basis,” they pointed out.

“Both countries also have signed major partnership agreements, including the construction of submarines and helicopters, and exchange over 7 billion euros of goods every year,” noted French TV network France24.  In 2018, Brazil launched the first of five French Scorpene-class diesel submarines under a $7 billion deal with France signed in 2008. The deal later spurred French authorities to investigate whether bribery was a factor in the sale.

As military adversaries, comparing Brazil to France is like comparing mangoes to French fries. The two simply don’t intersect. Brazil actually has the larger military—almost 350,000-strong—including several infantry brigades trained for jungle warfare. It also has a substantial domestic arms industry that exports some well-regarded weapons, such as the Embraer EMB 314 Super Tucano light attack aircraft, which the U.S. military almost purchased. In 2019, Brazil also received its first Swedish Gripen jet fighters. However, despite some advanced weaponry, Brazil armed forces would not be in France’s league in terms of training or command and control.

France does have nuclear weapons, which are useless in an environmental rescue mission (“we had to nuke the Amazon in order to save it”). France has a 200,000-strong military with a single nuclear-powered aircraft carrier, and a few highly capable airborne, special forces and Foreign Legion units capable of minor interventions, such as against Islamic rebels in Africa. But subduing Brazil, 5,000 miles from Paris and with a landmass about the size of all Europe, would be a different matter.

Not to mention something called the Monroe Doctrine, in which the United States. has made clear since 1823 that invading Latin America by any outside nation—except the United States—is a no-no.

All of which means that the chances of France invading Brazil are about the same as France invading Mexico again, as it did in 1861. Whatever happens to the Amazon, it won’t be a part of the la gloire of France.