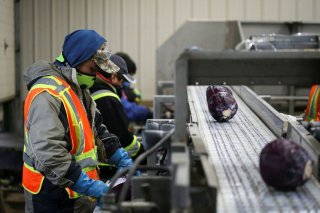 The aim of the Canada Emergency Response Benefit (CERB) is to offer vital income support to those temporarily out of work as a result of COVID-19. More than 7.5 million payments have already been deposited and applications continue to rise.

Yet the CERB stops short of supporting all essential workers.

Migrant Workers Alliance for Change estimates there are 1.8 million migrants and undocumented people in Canada. Present in nearly every area of Canada’s economy, from tech to construction, they are over-represented in sectors that provide essential services at low pay — sectors like agriculture, in which few Canadians choose to work.

Each year in Canada, some 60,000 migrant farm workers plant, prune and harvest fresh fruits and vegetables for domestic consumption and foreign export.

Others mind the young, elderly and ill in residences and care homes across the country. Many are employed to clean and sanitize our most private spaces.

According to the World Health Organization, migrants share common vulnerabilities that heighten their risk of infection. These include reduced access to health care, unsanitary working conditions and overcrowded housing. They are also frequent targets of racism, xenophobia and scapegoat rhetoric, forms of discrimination that worsen in times of crisis and to which Canada is not immune.

While not a cohesive group, together they make up some of Canada’s most marginalized workers.

By excluding undocumented people and many migrants who don’t have social insurance numbers, the CERB redraws notions of “essential work” along nationalist lines. This ignores the essential labour and needs of these critical members of Canadian society.

Out of work and stuck abroad

Perla G. Villegas is an organizer with Radical Action for Migrants in Agriculture, a migrant justice collective that I co-founded alongside Amy Cohen in the Okanagan Valley in British Columbia. In recent weeks, Villegas has spoken to countless workers — long-time participants in Canada’s Seasonal Agricultural Worker Program — whose visas have been delayed as a result of COVID-19.

Despite their temporary status, migrant farmworkers are “permanently temporary,” returning to Canada each year for decades. Multiple members of a single family sometimes work on Canadian farms, increasing their family’s dependence on the income they generate here.

“Imagine having worked 15 seasons, spending eight months of each year in Canada, and being ineligible for income assistance? They have come to Canada for so long that they don’t have stable work in Mexico, so they don’t have a regular income there. It’s obvious that they have temporarily lost their jobs, but while they remain outside of the country, they can’t apply.”

While Canada is not alone in its exclusion of certain migrant populations from assistance during COVID-19, some countries are taking steps in the right direction.

Portugal has been hailed for temporarily granting citizenship rights to migrants and asylum seekers with residency applications underway, but this move does not include undocumented migrants. Initiatives in California to provide economic assistance to migrants also fall short, reaching just 150,000 of the state’s two million undocumented people.

Prime Minister Justin Trudeau recently paid homage to the Canadian Charter of Rights and Freedoms on its 38th anniversary. “As our country confronts this pandemic, I’m especially grateful that Canadians have chosen to protect each other and care for one another,” he said.

Such words ring hollow while essential migrant and undocumented workers are forsaken by federal policy.

The CERB provides many Canadians with the economic cushioning they will need to survive the difficult months to come. But its disregard for some of our marginalized workers — those integral to our food production and security, health-care and construction and cleaning industries — reveals just how little we value migrant workers.

In its recent news release appropriately entitled “COVID-19 does not discriminate; nor should our response,” the United Nations Network on Migration urges that “migrants [be] included in measures that are being introduced to mitigate the economic downturn caused by COVID-19.”

Unprecedented times call for unprecedented measures. As CERB programs are expanded, we must not minimize the labour and needs of migrant and undocumented workers.

Income support must be extended to everyone, regardless of immigration status. Anything less constitutes discriminatory policy and further marginalizes essential migrant and undocumented workers.