Why China’s Amphibious Assault Ships Are a Really Big Deal 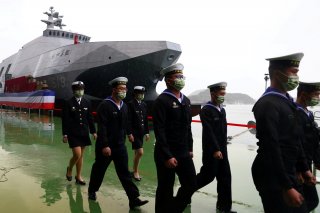 China has begun sea trials for its second new Type 075 amphibious assault ship and begun construction of a third, demonstrating a shipbuilding pace likely to be of significant concern to the Pentagon and U.S. Navy.

The Chinese news report did state that the ship was first launched in April 2020, suggesting that the developmental process for the ship has progressed well.

“Analysts said that the outfitting of the second Type 075 must have progressed very smoothly, since the ship was launched on April 22. By comparison, the first Type 075 set out for its maiden voyage on August 5, a little more than 10 months after its launch, which was also considered fast,” the paper said.

China has in recent months been massively stepping up amphibious assault drills, operational training and wargames in the vicinity of Taiwan and has also consistently explained that its attack capabilities would quickly overwhelm the island should there be a forcible reunification attempt.

Added to this equation is the belief among many that China is working on a maritime variant of its J-31 fifth-generation aircraft as a rival or counterbalance to the U.S. F-35B and F-35C.  However, while there is much discussion of a carrier-launched J-31, it is less clear that the Chinese have built or might build a vertical-take-off-and-landing fifth-generation aircraft such as the U.S. Marine Corps F-35B stealth fighter jet. This circumstance means that, when it comes to fifth-generation amphibious assault power projection, the Chinese might be operating at a deficit. Also, while the Type 075 amphibious assault ship configuration may mirror the U.S. Wasp and America-class amphibious ships in terms of deck landing and take-off space, yet another unknown is the possibility of whether the Chinese operate a helicopter or helicopter-like aircraft that is in any way analogous to the U.S. Osprey.

This means that Chinese amphibious attack may also be operating at some kind of amphibious attack capability deficit compared to the United States, given the speed, 450-mile combat radius range and troop transport capabilities of the U.S. Osprey. An aircraft analogous to an Osprey might, one could even posit, be considered essential any kind of mounted vertical maneuver operation requiring land forces to be forward dropped in hostile territory by air.