Why China’s High Speed Rail Project in Laos Is Different 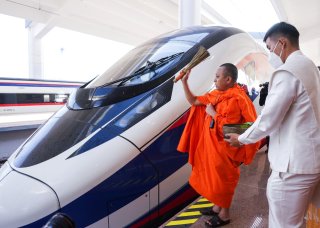 In December, China and Laos inaugurated the $5.9 billion highspeed rail (HSR) that linked China’s southern Yunnan province and the Laotian capital, Vientiane. Eventually, the Chinese and Laotians hope to connect much of the region by extending the rail to Thailand and Malaysia. It is a massive undertaking for an underdeveloped nation with a high debt to Gross Domestic Product (GDP) ratio like Laos. As a result, the project has been decried as another example of China’s “debt trap diplomacy”—predatory lending to small and underdeveloped countries to ensure deferential concessions to China when the loans are not paid back on time or in full. However, this antiquated view does not represent reality as countries in Southeast Asia have more leverage and negotiating power than is commonly understood.

To begin, China does have a history of predatory lending to underdeveloped countries through its Belt and Road Initiative (BRI). As Mark Green warns, “China’s efforts to use its [BRI] to broaden its geopolitical and economic clout risk saddling developing countries with unsustainable debt while increasing their dependency on China.” A four-year study by researchers at AidData found that 165 countries owe debts exceeding $385 billion to China. More striking, they discovered that forty-two countries had debt exposures to China exceeding 10 percent of their GDP.

As a result, we have seen countries defer to Chinese geopolitical interests as we did when Cambodia blocked the 2012 Association of Southeast Asia Nations (ASEAN) meeting communique because it indirectly mentioned Chinese aggression in the South China Sea or when China utilized the significant debt it owns in Djibouti to establish its first foreign military base there.

The prime example of Chinese debt-trap diplomacy is Sri Lanka’s Hambantota Port Development Project. After the port’s completion, it became famous for being a failure. Although it sits near one of the busiest sea lanes globally, only thirty-four ships in total docked there in 2012. As a result, Sri Lanka struggled to keep up with the interest and payments and was saddled with debt. As repayment, the newly elected Sri Lankan government in 2015 handed over the port and 1,500 acres of land for the next ninety-nine years. More than just the port, this gave China strategic footing in the Indian ocean.

Yet, cases like the Sri Lankan one, although worrisome, have created a false set of assumptions that all Chinese investments are predatory and, more importantly, the receivers of the investment are helpless. The situation is more complicated.

Laos exemplifies the complexity of the relationship between China and the countries it invests in. On the one hand, Laos has an unhealthy economic dependence on China: as of 2021, “Laos overall level of debt exposure to China is equivalent 64.8 percent of its GDP.” Laos also had to sell a part of its national security grid to China due to its dependence on its northern neighbor.

Yet, at the same time, this most recent HSR project demonstrates that recipients can engage with China on projects of vital importance without accepting predatory terms. The new rail line will serve as a lifeline for Laos, a landlocked country with one of the most underdeveloped transportation networks in the region. With the train crossing over rough terrain through 167 bridges and seventy-five tunnels at a speed of 160kph, it will radically connect the country. For example, the northern leg of the line from Boten to Vientiane that traverses mountains normally would take two days. With the HSR, it is cut down to only three hours. The potential future payoffs of this project are also enticing as there are plans to extend the line through Thailand and Malaysia. It will connect Laos with essential regional supply chains.

Moreover, the project languished for five years because Laotian negotiators held out for better terms. As  journalist Murray Hiebert remarks in his book, Under Beijing’s Shadow, “Beijing and Vientiane wrangled for years over the conditions of the project and China relented on several of its initial demands, even though Laos held a relatively weak hand.” Initially, Laos was going to take out a $7.2 billion loan from the Chinese EXIM Bank for the project. After the Laotian parliament and international banking institutions like the World Bank and the Asian Development Bank criticized the deal, the Laotian government took only a $500 million loan. As a result, China took a much larger stake in financing the project. Regarding the interest rate, Laos renegotiated the interest rate down from 3 percent to 2 percent. Finally, China wanted fifty-five yards on each side of the rail tracks to set up businesses, and eventually, it agreed to only sixteen yards.

It is important to note that these concessions weren’t due to Chinese benevolence. Without a doubt, a part of Laos’ leverage in this situation was that Beijing highly valued this project due to its importance for China’s regional connectivity objectives. But overall, countries like Laos, which are now economically stronger and have more options than before, have more leverage today than they had in the past. First, consider that Southeast Asia is one of the fastest-growing regions in the world. In 2019, the region averaged 5.4 percent growth and was responsible for 7 percent of global exports. For its part, Laotian GDP growth was 6.5 percent.

Secondly, and partly as a result, the region is attracting more investor interest than before. The emergence of great power competition between China and the United States and its allies has only intensified foreign direct investment in the region. In 2021, Japan, the European Union, and the United States were the largest investors in the region—not China. In other words, Southeast Asian nations have other options than China.

Like other Southeast Asian nations, Laos has recently begun balancing its economic over-dependence on China. In terms of developmental aid, Japan—if counted with the Asian Development Bank, in which Japan is the largest shareholder and investor—is the largest donor to the region. In 2016, Japan launched the Expanded Partnership for Quality Infrastructure (EPQI)—an infrastructure investment initiative positioned as an alternative to China’s BRI—and in early in 2021, Japan and Laos affirmed plans to pursue a strategic partnership. Thus, further opportunities for Laos to engage with Japan should continue to present themselves.

Laos is also increasing its relations with other powers like the United States. In 2012, Hillary Clinton became the first U.S. secretary of state to visit the country since 1955. In 2016, the two countries set up the U.S.-Laos Comprehensive Partnership, including a trade and investment framework agreement. Between 2013 and 2019, trade has increased threefold, and the United States Trade and Development Agency is inspecting the viability of a 20-megawatt solar project in the country.

Laos is engaging with smaller countries as well. After Joining the World Trade Organization (WTO) in 2013, Laos signed bilateral trade agreements with over fourteen countries. One of those countries, Vietnam, has a history of close ties with Laos given their geographic proximity and similar governments and economic systems. Between 2016 and 2020, Vietnam was Laos third-largest investor—with investments growing by 35 percent since 2010, and in 2020 Vietnam had a total investment capital of $143 million spread across nine projects, marking a 130 percent increase year over year. These investments included major infrastructure projects such as airports, roadways, and a new National Assembly building. Vietnam also expanded its bilateral free trade agreement originally signed in 1998. Similarly, Laos has increased its engagement with South Korea, which is already the fifth-largest investor there. Earlier this year, South Korean foreign minister Chung Eui-yong visited Laos—marking the first visit by a South Korean foreign minister in over twenty years—to discuss ways to increase South Korean investment there.

Laos is not the only example of a Southeast Asian nation engaging with Chinese investment from a secure negotiating position. Malaysia also successfully renegotiated nearly all of its BRI projects after Prime Minister Mahathir Mohamad was rushed back to power in a 2018 election. Mahathir’s election and the subsequent renegotiation of Chinese-related projects came after the previous administration was found to have corruptly accepted BRI projects at inflated prices in return for China bailing out the state’s investment fund. Likewise, Vietnam rejected all Chinese bids on its own crucial connectivity project, the North-South Expressway, after a domestic backlash against Chinese influence in the country bubbled up..

Despite this reality, commentators and China watchers have gotten accustomed to generalizing Chinese investment in Latin America, Africa, South Asia, and Southeast Asia—depicting it all as a malicious attempt to trap smaller nations through debt. Of course, much of Chinese investment is predatory and should be noted as such. However, aside from a few examples like Cambodia, Southeast Asian countries have more leverage and negotiating power than is acknowledged. U.S. strategists can’t accurately depict and predict Chinese strategy and motivation without the subtlety of fine distinctions in analyzing Chinese actions. Laos and the HSR project illustrate the nuance of Chinese investment and recipients’ relationship to it.