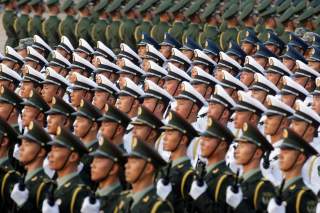 Key point: China isn't growing the way it used to and doesn't have as much money as it thought.

China plans a 7 percent boost to military spending in 2017. Even that may be more than it can afford.

On Saturday, China announced a 2017 spending growth target of 7 percent in nominal yuan terms. That represents a real yuan increase of less than 5 percent. Or, assuming that the People’s Liberation Army buys its tanks wholesale, applying China’s current producer price inflation index of 6.9 percent leaves no growth at all.

Real spending increases of anywhere from 0–5 percent are a far cry from the “insider” estimates of just one year ago, when security experts were confidently predicting double-digit spending increases for 2016 and beyond. Figures as high as 30 percent were mooted as tensions rose in the South China Sea.

Readers of the National Interest knew better. On August 5, 2015, they learned that China did “not have the fiscal staying power to compete in the long game of history.” It was already clear in the middle of 2015 that China’s central government revenues were flatlining and that as a result “China’s military spending will be caught between a rock and a hard place.”

It is well-known that China’s official budget numbers don’t capture all of its military spending. But then, neither do America’s, or any other country’s. The best analysis from the Center for Strategic and International Studies concludes that China’s figures are close to real and getting closer. Even if the true total is unknown, the year-on-year increases seem credible.

Since the turn of the century, China’s defense spending has bounced up and down between 1.9 percent and 2.1 percent of GDP, according to estimates from the Stockholm International Peace Research Institute (SIPRI). According to center, SIPRI estimates are the highest in the league; the U.S. Department of Defense, the British International Institute for Strategic Studies, and the Chinese government itself all give lower figures.

To put China’s 2 percent in context, SIPRI’s method gives 3.3 percent for the United States, down from a high of 4.7 percent in 2010 and the UK comes in at 2.3 percent. China may throw around its growing power in a very aggressive manner, but in comparative terms it does not seem to be spending very much on its military.

China does have the world’s second-largest military budget, but this seems only natural considering that it also has the world’s second-largest economy, largest population, third largest territory, longest land borders and largest number of neighbors, many of them hostile. China also has to worry about internal rebellion. It must be tough being a Chinese military planner.

For those planners, life is about to get a lot tougher. China’s official economic growth has fallen to 6.7 percent, with a target of 6.5 percent for 2017. These are supposedly real rates, adjusted for inflation. But the nominal growth rate for 2016 was 8 percent while China’s inflation rates ranged from 2.1 percent for consumer prices to 5.5 percent for producer prices. Try squaring that circle.

Assuming that China is massaging its GDP figures upward while massaging its inflation rates downward, the reality is likely that China’s real GDP growth rate is somewhere between 0 and 5 percent. No one really knows. Given high levels of misreporting, perhaps not even China knows.

It is certain that China’s economy was headed on a strong downward trajectory in 2015 as it converged toward typical middle-income levels of GDP per capita. By January 2016, falling exports and a slew of negative indicators suggested that China was entering its first real recession of the reform era.

How did China respond? It fired the director of the National Bureau of Statistics, Wang Baoan, and gave his job to the vice chairman of the economic planning commission, Ning Jizhe. Since February 2016, Ning has been simultaneously responsible for setting the country’s economic goals and measuring the results. Thus began China’s suspicious string of right-on-target GDP figures. Other indicators published by the bureau improved as well.

China also opened the spending floodgates to maintain growth at all costs. China’s official budget deficit rose from around 1.8 percent of GDP to 3 percent. But that’s just the tip of the iceberg. State-owned firms and banks were ordered to spend and lend, resulting in massive losses and ballooning bad loans.

Once a major source of government revenue, many state-owned enterprises have become zombie companies that suck in ever rising levels of state support.

Out of control local government debt is also a big concern. Some local governments are even starting to borrow in U.S. dollars rather than Chinese yuan, raising risks tremendously. And with China trying to tamp down massive property speculation, local governments could be in trouble. They rely on property sales for a substantial proportion of their revenue.

Government-ordered deficit spending at all levels of China’s state-dominated economy may have kept a recession at bay—but at a very high cost. In 2009–2010 China sidestepped the Global Financial Crisis with a one-time fiscal stimulus of around 6 percent of GDP. Today’s China stimulus is open-ended and incalculably larger—and that’s without a global crisis to deal with. China may have avoided recession so far, but when it comes time to pay the piper, the bill will be staggeringly large.

China says that it has capped its central government deficit at the official 2016 level of 3 percent of GDP. This magic number happens to coincide with the European Union’s “Stability and Growth Pact” criteria, so it is considered prudent. But according to official data, central government revenues are growing at around 5–8 percent per year while expenditures are growing at 10–15 percent. It doesn’t take a genius to see that something has to give.

Over the next few years, China will have to recapitalize all of its state-owned banks, bail out or close down many state-owned enterprises and expand social services to meet the needs of a rapidly aging population. These will all put even greater strains on China’s already overstretched central government finances.

For the three decades preceding 2015, China’s central government was in the pleasant position that tax revenues grew at double digit rates every year. Not only was China’s economy growing fast, but more and more of that economy was in the (taxable) private sector. When revenues are growing at 15 percent or 20 percent per year, budgeting is little more than shopping. Black cat, white cat, it doesn’t matter—just buy them both.

Now that the economy is growing slowly (if at all) and tilting back toward the state sector, central government budget revenues are rising at just 5 percent while local governments are in crisis. China is starting to look an awful lot like the inefficient, corrupt, lumbering, state-dominated economies we’re used to seeing in the developing world. China increasingly resembles a crowded Russia, or maybe seven Brazils stacked on top of each other.

It’s time to get over the idea that China is a relentlessly successful economic machine ruled by super-managers who have access to infinite resources to fund any and all initiatives, no matter how extravagant. China’s extensive South China Sea island building must be very expensive; China’s space program must be very expensive; fitting out the empty hulls of China’s new aircraft carriers will be very expensive indeed.

But the hard and fast laws of budgeting apply in China just as they do in Western democracies, and perhaps more so. Money spent on prestige projects is money that must be siphoned off from more important ones. In China, robbing Peter to pay Paul is made even more difficult by the fact that Peter might be a powerful party baron, or may pay a generous bribe to have his budget restored. Corruption is not cost-free. And the time-honored Western tradition of borrowing the money is an option that is rapidly receding for China.

You can cook the books, but you can’t cook the economy, and China’s economy now depends entirely on fiscal stimulus spending. That can’t go on forever. As a result, expect a more modest Chinese military footprint to emerge this year or next. China will remain the world’s second largest military spender, but it won’t be able to continue challenging the United States. It simply can’t afford the fight.

Salvatore Babones is an Associate Professor of Sociology & Social Policy at the University of Sydney. This first appeared in March 2017.