Why China Could Invade Taiwan Soon 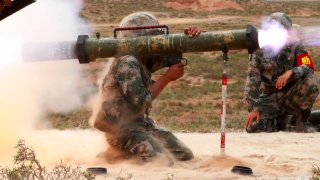 The period of “greatest danger” for Taiwan begins less than a year from now.

On Tuesday, H.R. McMaster, testifying before the Senate Armed Services Committee, stated that Chinese ruler Xi Jinping “has a fleeting window of opportunity that’s closing, and he wants to, in his view, make China whole again.”

President Trump’s national security advisor in 2017 and 2018 believes China could act “from 2022 onwards,” based on the Beijing Winter Olympics, which end February 20, and the Communist Party’s 20th National Congress, which according to tradition will be held in the fall of next year, most probably sometime in October.

McMaster, presently at the Hoover Institution, is correct. A year from now, therefore, the threat of a Chinese invasion of Taiwan will be higher than usual.

Beijing undoubtedly does not want to start a war before February 4, the day of the opening ceremony. There are already calls for a boycott of the Olympics, termed the “Genocide Games,” a reference to Chinese atrocities against Uighurs, Kazakhs, and other minorities in the misnamed Xinjiang Uygur Autonomous Region. There is a reasonable assumption in Washington that Xi will not commit an act of naked aggression before the Olympics because that would ensure the international community shuns the event. The Party evidently believes a successful Olympiad is crucial to its legitimacy.

Why is the 20th Congress relevant to an invasion threat? Xi is looking for a third term as the Party’s general secretary. The ruling organization has adopted an informal two-term limit for its highest post.

Some observers believe Xi has been facing new opposition due to recent policy mistakes. A takeover of Taiwan, which the Party insists is part of the People’s Republic of China, would almost certainly result in an additional five-year term.

Of course, China could invade Taiwan, which insists it is an independent state, at any time, but McMaster has correctly identified the period of greatest vulnerability for the Taiwanese nation. Are his policy recommendations also correct?

American currently maintains a policy of “strategic ambiguity,” not telling either side what the United States would do in the event of conflict. When asked by Senator Tom Cotton whether Washington should instead adopt a policy of “strategic clarity”—telling Beijing in no uncertain terms that America would defend Taiwan against Chinese invasion—McMaster said no change in policy was necessary.

“Strategic ambiguity is adequate, especially after we’ve made public the Six Assurances to Taiwan,” McMaster stated. The Six Assurances are Reagan-era promises to, among other things, not set a date for ending arms sales to Taiwan; not pressure Taiwan into negotiating with Beijing; not change the Taiwan Relations Act, which affirms American support for the island republic, and not recognize Chinese sovereignty over Taiwan.

Strategic ambiguity kept the peace for decades, but those were more peaceful times. Now, however, China’s actions are particularly hostile, and there have been calls, even from dovish observers like Richard Haass of the Council on Foreign Relations, that Washington should move to a clearer articulation of intentions.

“Strategic ambiguity has outlived its usefulness as it provides insufficient push-back against China’s aggressiveness,” Gerrit van der Wees, a former Dutch diplomat teaching Taiwan history at George Mason University, told The National Interest. “Beijing has ratcheted up pressure with military exercises, incursions, and circumnavigation flights, threatening peace and stability in the region. It is time to counter such provocative action by China with ‘strategic clarity.’ ”

“We need,” van der Wees argues, “to move away from the convoluted constructs of the past and move toward clear policies that have their basis in the principles of freedom, democracy, and self-determination.”

Clarity brings deterrence, something McMaster unintentionally highlighted. “The message to China ought to be, ‘Hey, you can assume that the United States won’t respond—but that was the assumption made in June of 1950, as well, when North Korea invaded South Korea,’ ” he told the Armed Services Committee.

Secretary of State Dean Acheson in January 1950 publicly drew a line of defense that did not include South Korea. The omission resulted in Mao Zedong and Josef Stalin giving approval to Kim Il Sung to invade the South. The American policy establishment, which had been previously unconcerned about the loss of the South, rushed to Seoul’s defense when Kim invaded in June 1950.

So the Korean War was avoidable. Kim was unlikely to have ever obtained the approvals of Moscow and Beijing if Acheson had declared Korea to be within the American defense perimeter. More than 36,000 Americans died for one of the worst mistakes in American history.

Today, the stakes are far higher than they were in 1950. For one thing, China is armed with nuclear weapons, and, thanks to Beijing, so is North Korea’s Kim Jong Un.

A conflict in the Taiwan Strait could soon involve the Korean peninsula, Richard Fisher of the International Assessment and Strategy Center tells The National Interest.

How? Xi Jinping could try to draw American forces away from a defense of Taiwan by having Kim threaten South Korea and even the American homeland.

So now, more than ever, the United States needs to be clear to deter China and its proxies. “Could China summon the ruthlessness to murder the democracy in Taiwan in 2022?” Fisher asks. “You bet.”