Why Is China Providing Drones to Fuel Libya's Civil War? 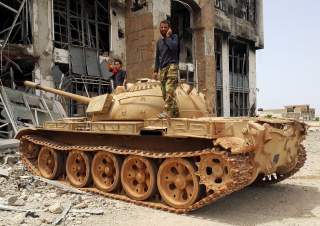 Key point: Beijing has been eager to cash-in on the arms trade and that means selling drones in addition to small arms. Chinese weapons have wound up all over the world, including Libya.

The remains of an apparent Chinese-made missile point to an escalating drone war in Libya.

In mid-April 2019, aviation expert Arnaud Delalande received from sources photos that appeared to depict the wreckage of a Chinese LJ-7 air-to-surface missiles. LJ-7 wreckage was found in and around Tripoli on no fewer than four separate occasions on April 17, 20 and 21, 2019, Delalande wrote.

The LJ-7 is the main armament of the Chinese-made Wing Loong drone. The Wing Loong, which is roughly similar to the U.S.-made Predator drone, is popular with Middle East air arms, including those of Egypt, the United Arab Emirates and Saudi Arabia.

Not coincidentally, both Egypt and the UAE have deployed forces for combat in Libya, where the Libyan National Army faction led by warlord Khalifa Haftar is battling the United Nations-backed Government of National Accord in Tripoli.

abruptly announced his support for Haftar during a mid-April 2019 phone call with the Libyan strongman. Trump’s support of Haftar undercuts the U.S. State Department, which along with many Western governments has backed the GNA.

But the UAE and Egypt support Haftar. The Emirates built up Al Khadim air base, a former airport in Al Marj province in eastern Libya, and in 2016 deployed Air Tractor manned attack  planes and Wing Loong drones to the base in order to provide air cover for Haftar’s forces.

“This small fleet was engaged in air-strike and reconnaissance missions in support of Libyan National Army troops fighting islamist groups in Benghazi, in particular the Islamic State and the Benghazi Revolutionaries Shura Council, or BRSC -- a group with ties to Al Qaeda,” Delalande wrote.

“Tripoli is far from this UAE-built air base, so the Wing Loongs might be operated from an alternative runway close to the Tripoli front in order to stay longer in the air for carrying out close air support [for the] LNA.”

The Wing Loong and other Chinese drones fast are proliferating. Beijing happily will sell armed unmanned aerial vehicles to pretty much anyone, meeting a demand for robotic warplanes that the United States refuses to satisfy. Export laws bar American companies such as General Atomics, which manufactures the iconic Predator and Reaper, from selling to many countries.

The Saudis alone have ordered around 330 Wing Loongs at a cost of more than $10 billion, Scramble reported.

Chinese unmanned aerial vehicles had their combat debut in Nigeria in 2015, when the Nigerian air force deployed missile-armed CH-3 drones against Boko Haram militants. The Wing Loong is a bigger and more powerful aircraft than the CH-3 is.

In April 2018, a Saudi Wing Loong fired an LJ-7 missile to assassinate Saleh Ali Al Sammad, the president of the rebel Houthi council in Yemen. A year later in April 2019, Houthi forces in turn shot down a Saudi Wing Loong. “The [drone] most probably fell victim to a man-portable air-defense system,” Scramble reported.

It’s worth pointing out that the Houthis have their own, small drones. In January 2019 the rebels flew an explosives-packed drone into a Yemeni government base during a gathering of Yemeni officials. The UAV exploded, reportedly killing six soldiers.

Some U.S. officials worry that Chinese drones could beat out American models on the world market and give authoritarian regimes and U.S. rivals access to the same high-tech capabilities that Washington would prefer to belong only to America’s closest allies.

“China is advancing its development and employment of UAVs,” the Pentagon concluded in the 2015 edition of its official report on Chinese military capabilities. “Some estimates indicate China plans to produce upwards of 41,800 land- and sea-based unmanned systems, worth about $10.5 billion, between 2014 and 2023.”

The RAND Corporation, a California think tank with close ties to the U.S. Air Force, warned that the spread of Chinese drones “could have worrisome implications for United States.”