Why China Still Needs the United States to Succeed 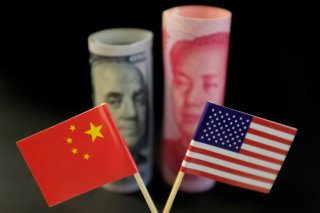 The United States watched China’s astronomic rise over the last few decades, hoping that an open market and capitalistic appeals would liberalize the authoritarian state. The world gave concessions in hopes to monetize the industrial might of the Middle Kingdom. The best-case scenarios did not pan out. Instead, the People’s Republic of China (PRC) stands on the world stage with the second-largest economy and near-peer military capabilities. While it is scary to think that U.S. hegemony may be challenged, it is far from clear that China poses a clear and present threat to America.

The United States cannot fall into the trap that existence means threat. We’ve never been in such a predicament; many comparisons to the Cold War and the USSR are “ill-fitting.” This is a unique situation, one that must be dealt with from all aspects of statecraft, but first and foremost, understanding the PRC’s goals and its relationship with the United States is a must.

The PRC’s outlook and success are largely dependent on U.S. success. Should the PRC try to maneuver and supplant the United States, they likely will buckle upon their foundations of internal problems and economic stagnation. The PRC, first and foremost, desires to protect the Chinese Communist Party (CCP) and its continued reign. To ensure this under an authoritarian regime, very much like the dynasties of old, there is a social contract between the ruling and the ruled, a sort of performance legitimacy. PRC citizens, neither right nor wrong, are more willing to have the CCP in power, and accept certain limitations in freedoms and privacy, in return for security and prosperity.

In terms of security, since 2015, crime rates have continuously dropped and are fairly low relative to their population. For comparison, in 2018, the United States with a population of 327 million reported more crimes than China’s 1.4 billion. The World Economic Forum’s ranking, taking into consideration organized crime, terrorism, and homicide rates, ranked China the fifty-fifth safest country in the world, just eking out the United States at fifty-sixth.

Of course, this sense of security is mostly catered to the ethnic Han Chinese majority group, accounting for over 90 percent of the country’s population. Ethnic minority groups, such as the Uighurs, do not benefit from such security “success.” Most view their current plight as cultural genocide and a crime against humanity. The dividend of such atrocities is no major terrorist attack in the region since 2015. Removing morality from the equation, the CCP can flaunt this as a security success.

The PRC’s export sector accounts for roughly one-fifth of its GDP, and the United States remains China’s largest single export market at 17 percent, or $419 billion. The U.S. footprint would be hard, if not impossible to replace. Even during a “trade war,” exports to the United States fell 16% but total bilateral trade of goods and services still totaled $637 billion.

As the PRC’s manufacturing sector embraces the shift to higher-tech, this change elevates the PRC’s status, and likely will increase trade with high-tech consumers, the biggest being the United States. As it stands, the PRC’s exports to the United States are already largely comprised of computers, electronics, and electrical equipment.

Leaders from all sides have thrown around the term “decoupling”. A closer look reveals that most corporations aren’t willing to do it. In 2012, President Barack Obama asked Steve Jobs if the iPhone could be manufactured in the United States; Jobs’ answer was no, and Apple CEO Tim Cook also shared this sentiment. Since the 1980s, international corporations established infrastructure and supply chains with enough capacity to meet demands. Disrupting this ecosystem means reorganizing a large portion of global production. In 2020, in the midst of the trade war and Trump’s threats for companies to move back to the United States, the American Chamber of Commerce in Shanghai reported that fewer than 4 percent were relocating any manufacturing capacity back home, and over 70 percent had no plans to do so.

China is the world’s largest soybean and meat consumer. Not only are the soybeans made directly into food, but the majority is used as animal feed for their enormous livestock industry. Due to their limited arable land, the PRC relies on agricultural imports to literally fuel their meat industry. U.S. soybean imports amount to over $8 billion annually and are second only to Brazil. However, the PRC relies on all available markets in order to meet demands. This key import, although fiscally smaller than other products and sectors, is vital to the larger PRC domestic ecosystem, and is one that would be hard to replace without the United States.

Next, in the realm of semiconductors, the PRC is heavily dependent on foreign inputs, especially from the United States. Every year, the PRC imports roughly $300 billion of semiconductors. As for the United States, around 25 percent of sales from US semiconductor companies are in the Chinese market. Although the PRC has put an emphasis on technology independence they are still and likely will remain behind global leaders. There are Chinese GPU companies, but their market share is essentially zero. Another example is Taiwan’s TSMC, the global leader in the foundry segment for thirty-three years. The major Chinese competitor, SMIC, remains four to five years behind despite twenty years of investment.

Overall, tens of billions of dollars have been spent, but the PRC’s domestic semiconductor dilemma has not drastically improved and remains virtually unchanged since 2014. Chinese counterparts remain decades behind in some of the most important semiconductor manufacturing areas. PRC technology independence is not possible in the medium term, and also unlikely in the long-term. Although the PRC can supplement trade deficiencies between the United States with other markets, it likely won’t be sustainable. Additionally, the type of goods traded possibly won’t meet the PRC’s economic strategic objectives.

The PRC’s, but realistically the CCP’s, ultimate goal is to ensure the rule and survival of the party, and the biggest threat to the status quo is domestic unrest. The two keys to CCP power over the population are security and prosperity. Although increased surveillance feeds the PRC’s security apparatus and is a means to clamp down on dissent, it has added a sense of security to the population and is tolerated.

On matters of prosperity, the CCP must find ways to guarantee economic growth. Their calculus will avoid any actions, regardless of veiled public threats, that may challenge their economic wellbeing. Although it may appear that the PRC is trying to overtake and replace the United States, it is not that simple nor is it likely the case.

The PRC relies too heavily on US inputs, and too much deviation from this norm, meaning a drastic reduction in U.S. hard and soft power, would reverberate too heavily upon the PRC ecosystem. Simply put, while China can grow and dominate certain areas, its growth and dominance are still derived from U.S. ingenuity and products. China pays $21 billion dollars a year for the use of foreign intellectual property, and over $8 billion of that is to the United States.  While conversely, China earns under $900 million a year from countries using its intellectual property. In addition, as argued by David Shambaugh, “[If] you don’t have an open intellectual environment and political environment, innovation is going to be difficult.” However, the necessary reforms are in stark contrast with what Chinese President Xi Jinping is building, and in his mind, likely endangers the hegemonic control of the CCP.

Without the domestic environment for innovation, the PRC likely will continue to rely on the United States. The balancing game is in their hands: challenge U.S. dominance, but not enough to break the current ecosystem. So, while the PRC looks to shake up the global order and rejuvenate its domestic growth, hidden in the fine print is the need for continued U.S. prosperity.

Jimmy Chien is an Intelligence Officer in the United States Air Force, having worked various problem sets in the Indo-Pacific and the Middle East. He received his commission at the University of Massachusetts Amherst, earning his bachelor’s degree in Chinese and History, and a master’s degree in Chinese. The views reflected in this article are the author’s own and do not reflect the opinions of the U.S. Air Force or the U.S. Department of Defense.

China Would Win a Trade War with America: Expert