Why China's New Air Defense System Could be Quite Dangerous 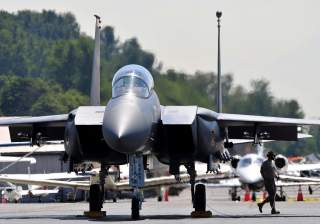 China is developing a new generation of surface-to-air missile defenses, but details are scarce.

“Researchers from the academy's Zhang Yiqun Laboratory have been playing a vital role in the development of China's new air-defense missile system by designing its control systems - the ‘brain’ of any missile,” reads a China Military Online posting, which by its own description is “authorized by the Central Military Commission of the People's Republic of China (PRC) and sponsored by the Chinese People's Liberation Army (PLA) News Media Center.”

“Compared with previous generations of air-defense missiles, the new-generation missile system will have a wider range of targets and be much more technologically sophisticated, taking China into the ranks of just a handful of nations capable of designing and producing such a system.”

Given the researchers’ description of the program, the new weapon system is likely to have a strong ballistic missile defense component.

“Metaphorically put, the mission of these control systems is to guide a needle to fly 1,000 kilometers to pierce the eye of another needle,” Wang Mengyi, deputy head of the Second Academy's General Design Department and former leader of the laboratory, told China Daily.

“For researchers from Zhang Yiqun Laboratory, their mission is to turn this seemingly impossible task into reality.”

“China is advancing a new ballistic missile interceptor, the HQ-19, according to an annual U.S. Defense Department report, in a development that may indicate progress toward a deployed missile defense system,” Alicia Sanders-Zakre wrote for the Arms Control Association.

“As of May 2016, the missile was still undergoing testing to intercept ballistic missiles having a range of 3,000 kilometers. An operational HQ-19 interceptor would be armed with a kinetic kill vehicle and be able to target ballistic missiles and satellites in lower-earth orbit. The HQ-19 is a significantly updated variant of the HQ-9, a long-range surface-to-air missile that has a limited capacity to hit short-range ballistic missiles up to 500 kilometers in range.”

There are also several other Chinese air and missile defense systems under development including the 2,000 km range HQ-26 and the HQ-29. The new Chinese missile could be one of these weapons or it could be something new. It could also be follow-on to the HQ-18, which was reverse engineered by the Chinese from the Russian S-300V series.

“The HQ-18 is a highly-capable, hypersonic air and missile defense system developed by China; most scholars agree it is directly reverse-engineered from the Russian S-300V system, but relatively little information is publicly known about the differences between the two systems,” reads a Missile Defense Advocacy analysis of the HQ-19.

“S-300V has two different versions distinguished by the missile it uses: The SA-12A Gladiator is used primarily for targeting aircraft, whereas the SA-12B Giant is primarily for countering tactical ballistic and cruise missiles. The Gladiator has a range of 75 km and a maximum altitude of 25 km, and the Giant has a range of 100 km and an altitude ceiling between 30 and 40 km.The S-300V system uses a phased-array sector-scan radar with a range of 175 km and can track up to 16 targets simultaneously,” the report noted.

The current generation of Chinese surface-to-air missile defenses is bad enough; future weapons will be even more of a problem.

“The S-300V family is one of the most capable aerial defense systems in the world, and an upgraded Chinese version should worry Western defense agencies,” the Missile Defense Advocacy states.

“S-300V was originally designed to destroy U.S. tactical ballistic missiles and ISR assets in a late Cold War setting; it has no Western equivalent. Moreover, no F/A-18 variant, nor the Joint Strike Fighter, were designed to penetrate the S-300V/VM’s aerial cover. The survivability of the F-35 ‘will not be significantly better than that of legacy combat aircraft,’ and the U.S. Air Force envisions the F-22 Raptor as the primary aircraft to dispatch an HQ-18. Additional development and production of the HQ-18 will likely replace the HQ-9 for long-range missile defense.”