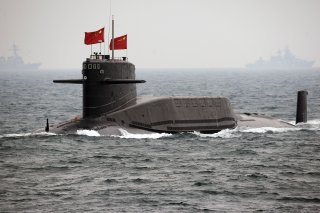 China is developing submarines with the ability to put the United States at risk of catastrophic nuclear attack from submarines, according to a Pentagon report.

The People’s Republic of China (PRC) is fielding newer SLBMs that can fly farther distances, such as the JL-3, China “will gain the ability to target the continental United States from littoral waters, and thus may consider bastion operations to enhance the survivability of its sea-based deterrent,” according to the Defense Department’s 2021 report on Military and Security Developments involving the People’s Republic of China.

Unlike the JL-2, which fires at more limited ranges, the JL-3 will reportedly operate with an ability to travel as far as fifty-six hundred miles. That means Jin-class submarines will not need to operate close to the shore in order to pose a threat to the United States.

“The current range limitations of the JL-2 will require the JIN to operate in areas north and east of Hawaii if the PRC seeks to target the east coast of the United States,” according to the report. The JL-3 substantially changes this calculus.

The PRC currently operates six Jin-class SSBNs equipped to carry up to twelve JL-2 missiles. The range of these weapons restricts the geographical flexibility of Chinese commanders, which would have a higher chance of being detected.

This range extension of the JL-3 is significant because it enables the newer Chinese submarine-launched nuclear missiles to outrange the U.S. Navy’s Trident II D5 missiles, which reportedly operate at ranges up to four thousand miles. Inland portions of mainland China are roughly ten thousand kilometers or so from the California coast. The math shows the JL-3 missiles will likely allow China’s nuclear-armed submarines to attack California or other parts of the United States from almost anywhere in the Pacific Ocean.