Why a Chinese Tiananmen-Style Crackdown on Hong Kong Would Have Terrible, Global Repercussions 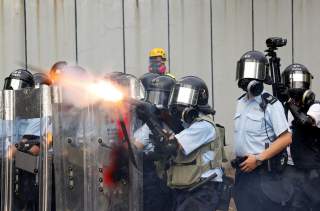 A crackdown of Hong Kong will have a very strong negative impact to the global economy, which is already slowing down.

The ongoing wave of protests in Hong Kong doesn’t seem to run out of steam and the city’s own police force seems to be unable to contain the protesters. The Hong Kong administration seems to be equally inept at resolving the underlying conflicts between Beijing and Hong Kong.

The Chinese communist regime will certainly not accept any solutions that would increase the freedoms or rights of the Hong Kong's citizens. The already huge disparity between the western styled society of Hong Kong and the developing dystopian police state in the mainland China is becoming a tough sale to the Chinese citizenson the mainland trying to cope with the mass surveillance and the social credit systems.

With the prolonged protests affecting everything from the air traffic to the city administration, the Chinese government has the perfect opportunity not only to crush the active protests, but also to bring the runaway region with foreign habits back to the uniform ant-farm of the communist party ruled mainland.

At the moment the Chinese government is mimicking the same "USA sponsored coup" fake narrative, that Russia used during the Maidan in Ukraine, this indicates that the Beijing is preparing to use extreme force and tries to sell it as justified action against American provocateurs.

It is highly unlikely, the Chinese People's Armed Police Force would relinquish the control ever again, after taking over the streets from the Hong Kong Police. Most likely it would be the end of the Hong Kong’s special status and the freedoms it’s citizens now enjoy, would be taken away rather quickly.

The PAP with PLA support has sufficient force to take over the HKPF’s duties and subdue the protests on the streets. Bringing the population under the communist party rule would be another matter, but China has amble experience and well tested methods for rooting out civil unrest and competing ideologies, that they developed in Xinjiang.

A crackdown of Hong Kong will have a very strong negative impact to the global economy, which is already slowing down. If the situation escalates to street fighting involving the PLA, it will certainly collapse the local stock markets. It's also guaranteed that Taiwan will take action to secure its independence by any means necessary. This rises the already tense situation in the region to a whole new level.

While local in the military scope the political and economical fallout of the possible Hong Kong crackdown will be global. Many of the authoritarian regimes in the world are balancing on an economic razors edge.

The Putin’s regime in Moscow is already losing popularity and the Russian police and the National Guard have been forced to resort to very heavy handed tactics with the weekly protests.  The collapsing economy is something that the Russian population will not tolerate. The unspoken deal between Putin and the Russian people has been that Putin can take away democracy and freedom, as long as he delivers economic growth and national prestige.

The people who run the show in Moscow can obviously see the writing on the wall. If they wish to survive, they need to pull a rabbit out the over sized hats their generals wear. The distraction must be a credible and victorious one.

The situation in Hong Kong has the potential to become a truly global black swan, encompassing both economic and military spheres with consequences that may be far greater than the fate of a city and its inhabitants.

Several other flash points are developing across the globe. Kashmir is on the verge of an insurgency, Turkey is pushing deeper into Syria, Israel is under a renewed Palestinian attack and the situation at the Strait of Hormuz between Iran and the West remains potentially explosive.

Are the global players safeguarding themselves for worsening US - China relations, or even planning to capitalize the momentum?