Why Chuck Schumer Should Apologize 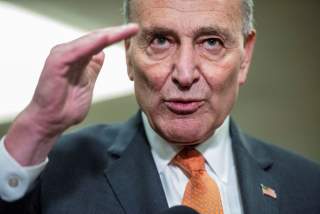 It would be a gross understatement—and in no way a pun, intended or otherwise—to describe as “injudicious” what Senate Minority Leader Chuck Schumer said Wednesday to and about Supreme Court Justices Neil Gorsuch and Brett Kavanaugh.

“Injudicious” is defined by Webster’s New World College Dictionary as “showing poor judgment; not discreet or wise,” and the New York Democrat’s remarks were certainly that. But in the words of his Senate Republican counterpart, Majority Leader Mitch McConnell of Kentucky, they were also “astonishingly reckless and completely irresponsible.”

That’s just commonsense. We know, especially in this era of fraught politics, how important responsible language is for our politicians.

But Schumer’s nonapology Thursday, in which he said he might have misspoken, but blamed others for “manufacturing outrage,” shows the New York Democrat has failed to learn his lesson.

To backtrack: Schumer—in a tirade at a rally for abortion rights supporters outside the Supreme Court on Wednesday, delivered while the justices were hearing an abortion-related case—warned the two justices of the possible ramifications of a politically incorrect decision in the case, June Medical Services v. Russo.

The court case is a legal challenge to a Louisiana pro-life law sponsored by a black female Democratic legislator, state Sen. Katrina Jackson. Her Unsafe Abortion Protection Act would require abortion practitioners to have admitting privileges at a hospital within 30 miles of the clinic as a safety measure.

“I want to tell you, Gorsuch; I want to tell you, Kavanaugh. You have released the whirlwind, and you will pay the price,” said Schumer, who wants the court to strike down the law as unconstitutional and is fearful Gorsuch and Kavanaugh instead will vote to uphold it. “You won’t know what hit you if you go forward with these awful decisions.”

Rep. Steve Scalise, R-La., called Schumer’s remarks “unhinged.” Scalise, after all, knows firsthand the potential for consequences of such incendiary and inflammatory rhetoric from the far left. He was shot and nearly killed in June 2017 by an unhinged radical supporter of Sen. Bernie Sanders, I-Vt.

For his part, Chief Justice John Roberts issued what The Washington Post characterized as a “rare rebuke” of Schumer.

“Justices know that criticism comes with the territory, but threatening statements of this sort from the highest levels of government are not only inappropriate, they are dangerous,” Roberts said in a written statement.

In the face of the much-deserved criticism, Schumer backpedaled Thursday, although he didn’t apologize.

“I shouldn’t have used the words I did, but in no way was I making a threat. I never, never would do such a thing, and Leader McConnell knows that. And Republicans who were busy manufacturing outrage over these comments know that, too,” Schumer said on the Senate floor.

“I should not have used the words I used yesterday. They didn’t come out the way I intended to. My point was, there would be political consequences—political consequences,” he insisted. “Of course, I didn’t intend to suggest anything other than political and public opinion consequences for the Supreme Court, and it is a gross distortion to imply otherwise.”

If he were a Supreme Court justice, Scalise would surely issue a dissenting opinion. “Enough. This rhetoric has dangerous consequences,” he tweeted when Schumer first made his remarks.

Of course, President Donald Trump weighed in, with a tweet that noted, “If a Republican did this, he or she would be arrested, or impeached. Serious action MUST be taken NOW.”

As though to heed the call, Sen. Josh Hawley, R-Mo., said he would introduce a resolution calling on the Senate to censure Schumer for his intemperate remarks.

“I would call on Schumer to apologize, but we all know he has no shame,” Hawley wrote in a tweet.

Rep. Andy Biggs, who chairs the House Freedom Caucus, also announced he was introducing a resolution against Schumer.

“Threats towards any elected or appointed member of the three branches of our constitutional government are wrong and cannot be tolerated,” the Arizona Republican said in a statement. “Minority Leader Schumer is the leader of his conference, and, while he may offer public criticism about decisions with which he disagrees, he should not use rhetoric that is threatening and intimidating towards members of our independent judiciary.”

Even House Speaker Nancy Pelosi, D-Calif., conceded the inappropriateness of Schumer’s remarks. “It wasn’t right for anybody to do,” she said, though she added that Republicans had a double standard for Trump’s comments.

Meanwhile, some Democrats circled the wagons around Schumer, with some criticizing Roberts for not also chastising Trump over his recent criticism of liberal Justices Sonia Sotomayor and Ruth Bader Ginsburg, and with a Schumer spokesman suggesting that the lawmaker’s remarks were misinterpreted by “the right wing.”

Neither defense passes the smell test: Trump’s criticism of Sotomayor and Ginsburg didn’t involve anything that could be construed as threats of physical violence to their personal safety, and Schumer spokesman Justin Goodman’s assertion that his boss’ remarks “were a reference to the political price Senate Republicans will pay for putting these justices on the court” is itself “a deliberate misinterpretation” of what Schumer said.

If Hawley’s censure resolution actually gets to the Senate floor, it will be interesting to see how many—if any—Senate Democrats are willing to break ranks and help deliver the “rebuke” Schumer’s ill-tempered remarks so richly deserve. Ditto for Biggs’ resolution in the House.

It will also show whether they are serious about embracing—or just paying lip service to—the 1999 admonition of a fellow Democrat, then-President Bill Clinton.

“We must stop the politics of personal destruction,” he said. “We must get rid of the poisonous venom of excessive partisanship, obsessive animosity, and uncontrolled anger.”