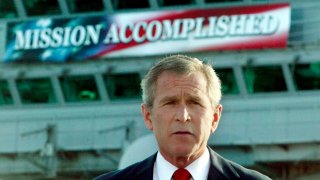 In failing to defend the intended meaning of the 2001 Authorization for the Use of Military Force (AUMF), Congress has abdicated its role as the federal branch responsible for authorizing military operations. Originally intended to enable a response against Al Qaeda and its allies after the September 11 attacks, the authorization has been stretched to justify presidential military actions far beyond its scope. A revision of the statute is necessary to restore Congress’ war-making powers while maintaining the president’s ability to achieve national-security objectives. The most appropriate model for a revised AUMF concerning insurgent extremism in the War on Terror is the 1983 Multinational Force in Lebanon Resolution. The temporal and geographic limitations of the 1983 statute provide a model for responsible, Congress-led force authorization that is in line with its Article 1, Section 8 constitutional power to declare war.

Justice Robert H. Jackson’s presidential power framework from the landmark Youngstown Supreme Court decision—which said the president’s authority was at its peak when it was approved by Congress—has been used to justify the expansion of executive power under the 2001 AUMF. However, a consideration of Congress’ deliberations on that authorization and the Congress’ constitutional role suggest that the measure was meant to be narrowly interpreted. Decisions by the Bush administration and Congress in the days leading up to the 2001 AUMF reveal an effort by Congress to push back on the executive branch’s attempts to obtain a blank check from the legislature. On September 12, the first draft of the authorization was written by Bush’s legal advisors and sent to Congress. Its language conferred particularly broad powers onto the President, authorizing him to “use all necessary and appropriate force… to deter and pre-empt any future acts of terrorism or aggression against the United States.” This language, as well as a last-minute attempt by the administration to place the United States within the geographic scope of military activity, was rejected by lawmakers specifically because of fears it would eliminate the role Congress played in prosecuting war. “Dismissing the President’s proposal as an overreach . . . [a] consensus quickly developed that the authority should be limited to those responsible for the September 11 attacks, and to any country harboring those responsible,” explained David Abramowitz. Hence, the notion that Congress willingly ceded its Article 1, Section 8 power to declare war is not supported by the events preceding the 2001 AUMF’s passage.

Using Justice Jackson’s categorical framework from Youngstown, the only presidential power that was validated in the 2001 AUMF by Congress was the right of the president to use military force against the individuals and groups directly and indirectly responsible for 9/11. The Commander in Chief’s authority was slightly expanded in the 2012 National Defense Authorization Act, which included a provision stating Congress’ support for the AUMF’s extension to the detention of enemy combatants, a long-held view of the executive branch. All other actions that executive counsel claimed were legal because of the 2001 AUMF, however, either fell into Jackson’s second Youngstown category, where Congress was silent, or the third, where Congress explicitly restricted presidential authority. In fact, legislative restriction was referenced in the text of the 2001 AUMF. Section two of the statute affirmed the force authorization’s adherence to the War Powers Resolution of 1973, stating that “nothing in this resolution supersedes any requirement of the War Powers Resolution.” Despite attempts by Congress to keep the 2001 authorization as narrow as possible—thereby necessitating future plans to use force would require another authorization from Congress—the official text of the statute was ambiguous enough that presidents Bush, Obama, and Trump have used it to justify circumventing Congress in the war-making process. Given the disregard for the legislature’s role in authorizing military force, Congress must enact a new force authorization that recognizes the War on Terror’s unique qualities. An authorization that imitates the 1983 Lebanon AUMF will address the needs of the Commander-in-Chief while ensuring Congress plays an active role in the war effort.

The events that transpired in Lebanon in the early eighties led to a Congressional force authorization that offers a framework Congress can adopt to restore its Constitutional power to authorize military conflict. In 1982, the Lebanese president-elect was assassinated, and U.S. President Ronald Reagan sent a contingent of Marines to Lebanon as part of an allied coalition to quell the ethnic and religious unrest. As the situation escalated from a peacekeeping mission to an active military conflict, Congress demanded a new report from President Reagan invoking the portion of the War Powers Resolution that would initiate a process of Congressional review. After Congress threatened to remove further funding for the Marines stationed in Lebanon, Reagan conceded, signing the Multinational Force in Lebanon Resolution in October 1983.

The resolution, which satisfied the congressional authorization requirement of the 1973 War Powers Act, called for: (1) limiting the president’s use of armed forces solely to the objectives of the Lebanese crisis, (2) establishing the length of the authorization at 18 months, with a potential renewal, and (3) imposing requirements for informing Congress of the president’s decisions. Given the War on Terror’s broad scope, multiple force authorizations of this nature would have to be passed and renewed on an ongoing basis, but the narrow temporal and geographic scope of each authorization, as well as the reporting requirement, would serve as a check on the president’s military authority, ensuring new conflicts are always addressed by Congress. For example, one AUMF would have to specifically address the war in Afghanistan. A clear statement of objectives at the outset, followed by an 18-month authorization period and periodic reporting would provide an appropriate window of opportunity for the president to pursue his military goals as commander-in-chief, while preventing him from expanding the scope of the conflict without Congress’ knowledge. In this way, a slew of narrow Congressional force authorizations for the many conflicts in which the United States is engaged would necessitate an interplay between Congress and the president, thereby restoring the delicate war-powers balance the Founders intended.

While it may seem logical to continue using the 2001 AUMF as a force authorization against adversaries around the world, Congress sets a dangerous precedent by not reasserting its constitutional rights. Without proper involvement by Congress, further ambitious expansion of executive war powers by a presidential administration could completely remove Congressional oversight of war, increasing the likelihood of irresponsible military decisions that go against the will of the legislature. In order to restore the foundational principle of checks and balances, Congress should pursue new military force authorizations modeled after the 1983 Lebanon resolution.

Artur Kalandarov is a student at Bowdoin College. This essay took first prize in the 2020 John Quincy Adams Society/The National Interest student foreign policy essay contest. You can read the other winners here.