Why Did 75,000 Russian Soldiers Just Wage a Mock War (Against Each Other?) 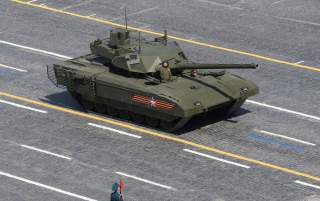 For the first time in years, Russia is conducting wargames that pit Russian divisions and brigades against each other.

And that’s a big deal, say the U.S. Army’s Russia experts. In September 2018, Russia’s Vostok-18 exercise created a buzz as three hundred thousand Russian soldiers allegedly battled each other in a massive wargame. However, the real number may have been closer to seventy-five thousand.

The gimmick with Vostok-18 was that even if a Russian brigade dispatched a single battalion to the exercise, Russia counted it as if the entire brigade participated, thus inflating the numbers. Nor was it clear that the exercise featured large-scale mock battles involving units fighting as complete divisions and brigades, rather than a series of small battles comprising battalions and companies.

While Russia publicized Vostok 18, it didn’t spotlight a smaller set of exercises in October 2018, a wargame in which complete Russian divisions and brigades battled each other (“force-on-force”).

“Apparently, the exercise is the first of its kind in recent memory involving divisions or brigades conducting exercises against one other,” according to the U.S. Army’s Foreign Military Studies Office.

The exercise took place in Russia’s Southern Military District, which encompasses southern Russia, the Caucasus and Russian-annexed Crimea. It involved a wide array of units, including the 8th, 49th and 58th Combined Arms Armies, the 22nd Army Corps, the Caspian Flotilla, the Black Sea Fleet and the 4th Air Force, as well as air defense and Spetsnaz commandos.

“For the first time in exercises of this level, the opposed forces principle was implemented, in which troops in two operational directions conducted combat operations against each other...Prior to the command staff exercise the troops of the military district conducted just company and battalion tactical exercises,” said Colonel-General Aleksandr Dvornikov, who commands the Southern Military District.

“For the first time, within the framework of the teachings of this level, the principle of bilateralism was implemented - groups of troops created in two operational areas conducted military operations against each other,” said a Russian Ministry of Defense press release. “To monitor and analyze the decisions of the commanders and commanders [sic], a management headquarters was deployed, comprising more than 200 officers of the mediation staff. The actions of all participants of the event were evaluated on the ground, including the implementation of dozens of introductory units by the units.”

“The implication of the October exercise is that the Russians believe that large-scale warfare is now more a possibility than previously thought and that such warfare will not be conducted by large numbers of independent battalion tactical groups, but instead by brigades and divisions/ regiments,” concludes the U.S. Army’s FMSO. “Interestingly, the Russians have chosen to pit units against one another, instead of creating an opposing force (OPFOR) to replicate enemy capabilities. Apparently, the use of a notional OPFOR was either deemed not feasible or unnecessary for this event.”