Why Did Bezos Dump $4 Billion in Amazon Stock? 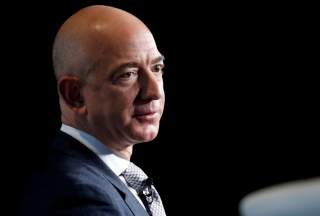 Tech titan Jeff Bezos sold a giant chunk of Amazon stock recently after telling reporters three years ago that he sells around $1 billion of stock a year to prop up his space company.

Bezos sold over $4 billion in the online company’s stock over the past 11 days, CNBC reported Tuesday, citing Securities and Exchange Commission (SEC) filings. He sold more than $500 million in shares on Feb. 7, the report noted, adding that the deal was prearranged.

The billionaire CEO told reporters in April 2017 that he sells about $1 billion in Amazon stock per year to finance Blue Origin, a space exploration company.

“My business model right now … for Blue Origin is I sell about $1 billion of Amazon stock a year and I use it to invest in Blue Origin,” Bezos told reporters at the annual U.S. Space Symposium in Colorado at the time. “It’s a long road to get there and I’m happy to invest in it.”

Bezos’s worth fell to $111.4 billion in 2019 after he divorced his wife in April of that year, according to the Bloomberg Billionaires Index. He lost more money than any other human on the planet that year. He was worth roughly $150 billion before the split.

Reports of Bezos’s stock sell came after Amazon asked a federal court Monday to force President Donald Trump to testify about the Department of Defense’s decision to award a major Pentagon project to one of his the company’s biggest competitors, Microsoft.

Amazon acknowledged in the court filing Monday that deposing a sitting president in a contract protest is unlikely to bear fruit. “A deposition of a sitting President of the United States presents unique circumstances,” the company noted in a footnote to the filing.

Amazon was considered a front-runner for the cloud computing project, but the tech behemoth fell out of favor after Trump found out about the deal. The decision to give Microsoft the deal came in October 2019 after Trump, a Bezos critic, instructed DOD in August 2019 to put the contract on hold.

Amazon has not responded to the Daily Caller News Foundation’s request for comment.