Why Did the Coast Guard Sail Right by Taiwan and China in 2019? 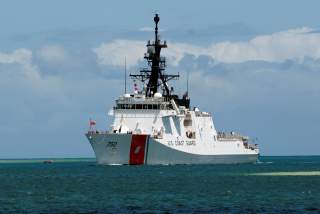 Key point: Washington has been using its ships to ensure any nation can safely navigate the seas. It is also to show China that America cares about Taiwan.

The U.S. Coast Guard sent one of its biggest and most advanced vessels through the Taiwan Strait on March 25, 2019, drawing protest from China and hinting that the Coast Guard might take on a more forceful military role in the disputed waters of the Western Pacific.

The cutter USCGC Bertholf transited the 110-mile-wide strait in the company of the U.S. Navy destroyer USS Curtis Wilbur, The Japan Times reported.

The two ships "conducted a routine Taiwan Strait transit … in accordance with international law," U.S. Navy spokesman Lt. Joe Keiley told the newspaper. "The ships’ transit through the Taiwan Strait demonstrates the U.S. commitment to a free and open Indo-Pacific. The U.S. will continue to fly, sail and operate anywhere international law allows."

The transit is "likely to be interpreted by China as implicit support for self-ruled Taiwan," The Japan Times noted.

"China has paid close attention to and monitored from start to end the passage of the U.S. military vessels through the Taiwan Strait," Beijing's foreign ministry stated on March 25, 2019.

"We have made representations to the U.S. side," a ministry spokesperson continued. "We urge the U.S. to strictly abide by the one-China principle and the three China-U.S. joint communiques, prudently and properly handle Taiwan-related issues and avoid damaging China-U.S. relations and cross-straits peace and stability."

Bertholf's appearance in the Taiwan Strait echoes China's own aggressive deployment of coast guard vessels to enforce its claims on disputed islands in the China Seas.

"The coast guard, is ... the world’s largest, with more hulls than those of all its regional neighbors combined: 225 ships over 500 tons capable of operating offshore and another 1,050-plus confined to closer waters, for a total of 1,275," Erickson wrote.

Bertholf's deployment proves that the U.S. Coast Guard also can deploy its own sophisticated vessels on missions with military significance. The Coast Guard operates around 80 large cutters and hundreds of smaller vessels.

Bertholf is the lead vessel in a new class of large cutter. 418 feet long and displacing 4,600 tons of water, Bertholf roughly is the size of a frigate. Her armament includes a 57-millimeter cannon, a 20-millimeter Phalanx self-defense gun and machine guns.

She also carries an MH-65 helicopter and at least one Scan Eagle drone. The Coast Guard operates six cutters like Bertholf. Another five are in testing or under construction.

Lyle Morris, an analyst for the California think tank RAND, told The Japan Times that Bertholf's Taiwan Strait transit was "a bold move."

"For one, it signals a new level of interoperability between the [U.S. Navy] and [Coast Guard]," Morris said. "It signals a willingness to send a cutter for sensitive national security missions. It doesn’t get much more sensitive than the Taiwan Strait."

"It’s also making a statement to the Chinese to send a cutter to the strait,” Morris added. "It’s another way of showing China that the U.S. is putting its money where its mouth is to advance the ‘Free and Open Indo-Pacific’ concept."

Adm. Karl Schultz, the Coast Guard commandant, praised Bertholf's crew for helping to police smuggling to and from North Korea. "They’ve helped with keeping an eye out for shipments of fuel, coal and things that they’re doing below the radar," Schultz told USNI News.

Bertholf’s deployment "is an important national mission. It’s an important international mission," Schultz said. When Bertholf departs the Western Pacific, another large cutter will take her place, the commandant added. The back-to-back deployments could point to a longer-term Coast Guard commitment to missions in waters near China.

"They will be utilized for best effect by their Navy bosses right now," Schultz said. "We’ve made a commitment to support that commander for the good part of the calendar year 2019, then we will inform the future beyond that."