Why Did the Indian Air Force Fighters Recently Scramble to Chinese Border? 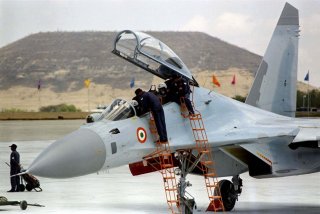 Earlier this week Indian Air Force jet fighters conducted sorties over Ladakh near the India-China Line of Actual Control (LAC) border, the demarcation line that separates Indian-controlled territory from Chinese-controlled territory in the former princely state of Jammu and Kashmir. The fighters flew missions over the disputed regions amidst the ongoing heightened tensions between Indian and Chinese troops that began after a scuffle between Chinese People’s Liberation Army soldiers and Indian Army troops along the LAC in North Sikkim resulted in injuries on both sides.

The fierce face-off involved some 250 Indian and Chinese soldiers, armed with rods, batons and stones, in the disputed “Finger 5” (mountainous spur) area on the northern bank of Pangong Tso. The confrontation was diffused after brigadier-level talks.

“Aggressive behavior by the two sides resulted in minor injuries to troops,” Indian Army Eastern Command spokesperson Mandeep Hooda told Newsweek. “It was stone-throwing and arguments that ended in a fistfight.”

However, two frontline Sukhoi-30MKI jets of the IAF, flown from the Leh air base in Ladakh, were deployed to the region after a pair of Chinese military helicopters was detected flying close to the LAC.

“The Chinese military helicopters were flying very close to the Line of Actual Control. After their movement was picked up, the Indian Air Force fighter jets flew patrols in the area,” government sources told the Indian media.

In a statement reported by Newsweek, the Indian Army claimed that aggression between Indian and Chinese forces is not uncommon, and is usually resolved mutually as per established protocols. China has downplayed the incident and said in a statement that the two nations “stay in close communication concerning our border affairs within existing channels.”

However, tensions between the two Asian powers have been slowly rising along the LAC in recent years. One of the more tense confrontations occurred between India and China in 2017, resulting in a 73-day face-off after the Indian side stopped the building of a road in the disputed area by the Chinese Army.

The contested area of the India-China border, the LAC spans a little over 2,500 miles. It was established as a demarcation line after the 1962 war, which ended in a Chinese victory when the PLA declared a ceasefire and withdrew to its claimed “Line of Actual Control.”

This latest incident occurred soon after Indian security establishment had noted increase patrols of Pakistani Air Force F-16S and JF-17s along the latter’s eastern border with India. In addition, earlier this month in Jammu and Kashmir’s Kupwara district five Indian security personnel including a colonel who headed the 21st battalion of the Rastriya Rifles were killed during a counter terrorism operation. Fears of retaliation by Indian forces have been seen as the reason for the ramped up Pakistani air patrols.