Why Did Putin Offer All of Ukraine Expedited Russian Citizenship? 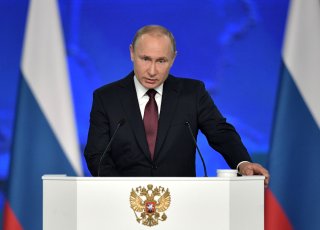 Russian leader Vladimir Putin signed a decree on Monday that would allow any Ukrainian living within Russian-occupied territory to apply for Russian citizenship with simplified admission procedures, according to the Kremlin’s official website.

Prior to the new decree, only residents of the Donetsk People’s Republic and Luhansk People’s Republic, the pro-Russian breakaway regions in eastern Ukraine, had been allowed to apply for Russian citizenship with simplified procedures. In the months following Russia’s invasion of Ukraine, the fast-tracked citizenship program was expanded to the Ukrainian regions of Zaporizhia and Kherson, the only regional capitals that Russia has captured in the five-month war.

The fast-track program was initially approved by the State Duma, Russia’s lower house of parliament, in 2019, and signed into law by Putin the same year. From then until the onset of Russia’s invasion, roughly 720,000 residents of the two separatist regions, or around one-fifth of the total population, received Russian citizenship and passports. Following the program’s rollout in Kherson and Zaporizhia, some of the regions’ residents reportedly accepted Russian citizenship, although the evidence suggests that most have not.

Putin’s decree declared that “all citizens of Ukraine” would be given “the right to apply for admission to the citizenship of the Russian Federation in a simplified manner.” In addition to other simplifications, the fast-tracked admission program would not require its applicants to take a Russian language test or demonstrate that they had sufficient funds to actively participate in Russian society.

Ukrainian officials swiftly attacked the decree as another infringement of Ukraine’s sovereignty.

“The … decree is another encroachment on the sovereignty and territorial integrity of Ukraine,” the Ukrainian Foreign Ministry claimed, insisting that Putin’s action was “incompatible with the norms and principles of international law.”

Foreign Minister Dmytro Kuleba concurred, arguing that Ukrainians “do not need Putin’s citizenship, and attempts to impose it by force are doomed to failure.” The Ukrainian foreign minister also argued that the decree showed evidence of Russia’s “aggressive appetites” in the war, noting that the mass approval of Russian citizenship in its occupied territories suggested an intent to incorporate them into Russia.

Russia’s invasion of Ukraine has allowed it to capture a stretch of territory from Ukraine’s eastern Donbass region to Kherson, a city along the south bank of the Dnieper River above the Crimean Peninsula. These territories form a land bridge between mainland Russia and the peninsula, which Russia illegally annexed from Ukraine in 2014. Ukrainian officials have warned that Russia might attempt to annex the territory to strengthen its access to Crimea—a development that the country’s leaders have vowed not to allow.