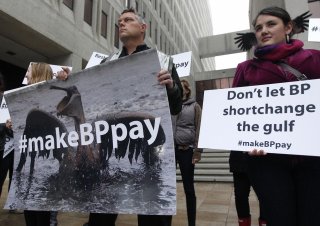 When the Deepwater Horizon oil spill released 4 to 5 million barrels of oil into the Gulf of Mexico in 2010, some early projections estimated that the toll on fisheries could reach US$5-10 billion by 2020. Chemicals in crude oil may affect fish and other marine creatures directly, through their toxicity, or indirectly by harming their food or habitat, and the effects can be immediate or long-term.

I began conducting marine science research in the northern Gulf of Mexico in 2006, and was immediately taken by the diversity of fishes, water bodies, habitats and economic sectors along the coast. This region is still home to my favorite saltwater environments – places like the Chandeleur Islands off Louisiana, and Florida’s St. Joseph Bay.

From 2006-2009, I worked with teams studying the ecology of fishes that inhabit the tidal salt marshes and underwater seagrass meadows of the northern Gulf. As the Deepwater Horizon spill unfolded, I shared many other people’s deep concerns about the terrible human toll, and the ecological and economic damage to places like the sensitive shores where I had worked.

Ten years later, though, there’s some welcome good news. In our research, my colleagues and I have found that the Deepwater Horizon spill did not appear to cause significant oiling injury to coastal fish populations.

It’s a remarkable outcome, and a sharp contrast to the spill’s effects farther from shore, where it killed thousands of marine mammals and sea turtles and severely harmed life on the seafloor. Why did coastal fisheries fare better? The answers are complex, and likely due to multiple mechanisms that we don’t fully understand.

The Deepwater Horizon blowout started on April 20, 2010, and the well was not capped until July 15. A month after the blowout, oil began encroaching on salt marshes and seagrass meadows across the northern Gulf, with inshore surface slicks persisting through August.

This period overlapped with a seasonal peak in fish reproduction and immigration of larval fishes into estuaries – coastal zones where fresh and salt water mix, and underwater seagrass meadows provide food and habitat.

Using data from our pre-spill research – which sampled seagrass habitats in 12 estuaries from Louisiana to the Florida Panhandle – as a baseline, marine scientist Kenneth Heck and I resurveyed these same areas in the summer and fall of 2010. We found that the abundances of juvenile fishes such as drums, croakers, flounders and snappers had not fallen below normal levels. In fact, catch rates for many species were higher relative to 2006-2009.

This pattern has held since 2011. Abundances of seagrass-associated fishes have continued to match pre-spill patterns across our study sites.

Since these findings were published, we and other scientists have found similarly stable fish populations in diverse coastal areas hit by Deepwater Horizon oil. They include salt marsh-associated fishes in Louisiana and Alabama, estuarine fishes throughout Mississippi Sound, coastal Gulf menhaden, and shrimp in Louisiana bays.

Recently, I’ve been working with a talented undergraduate student at the University of North Carolina at Chapel Hill to revisit commercial and recreational fishery harvest data going back to 2000. Those data, extending to 2017, also indicate remarkable stability in fish and shellfish harvests across the northern Gulf in the decade following the spill.

This lack of apparent oiling impact on fish populations is actually consistent with the aftermath of other oil spills, including smaller-scale events in the Gulf and others in the Galapagos in 2001, near New York in 1990, and off Santa Barbara in 1969. It even was true for the 1989 Exxon Valdez spill, which released 11 million gallons of oil in a prime fishing zone along Alaska’s coast.

In that infamous case, Pacific herring were the single major fishery stock that collapsed. Even that didn’t occur until five years later, and the cause is still debated. My own view is that some indirect, delayed instability related to oiling likely did impact those herring, although menhaden – an analogous fish in the Gulf of Mexico - have not shown signs of collapse following the Deepwater Horizon spill.

Fishes’ general resilience to oiling at the population level is even more surprising given what we know about how hydrocarbon exposure affects individual fish. In both lab experiments and fieldwork after Deepwater Horizon, scientists found that exposure to hydrocarbon compounds in oil and dispersants used to break down slicks during the spill harmed individual fish.

Indeed, a review I conducted with other marine scientists and toxicologists in 2014 found that in about 99% of cases, individual fish exposed to concentrations as low as one part per billion of weathered oil and/or Corexit dispersant from the Deepwater Horizon spill showed negative responses. They included changes in genomic expression, physiological performance, reduced reproduction, abnormal behavior and lower survival.

So why don’t these individual-level damages appear to show up as losses at population or community levels?

First, since oiling in many estuaries was highly patchy, it’s possible that many fishes, and some crabs and shrimp, were simply able to move away from it. Second, the fact that the spill affected many marine birds and mammals might have reduced predation on smaller fishes.

The blowout also affected another key predator: humans. The spill response included large-scale fishery closures in the northern Gulf, which may have allowed for more reproduction by surviving adults in the spring and summer of 2010. This, in turn, would have showed up as greater abundances of fishes over the following months and years.

Quantifying how ecosystems respond to broadscale impacts of something like a massive oil spill is extremely complex, especially when scientists can’t test all of the possible explanations for what they find. Researchers can expose fish to oil and dispersant in a lab and see how they react, but they can’t go out and dump oil in a marsh to replicate the spill, or replay the 2010 fishing season without spill closures.

My decade studying the Deepwater Horizon oil spill has made me reconsider the relative impacts of “pulse” versus “press” disturbances on coastal fishes. Pulse disturbances are big, one-time events like oil spills or hurricanes. Press disturbances are more gradual and have more insidious effects that accumulate over time. Climate change, coastal habitat degradation and intense fishing are examples.

Pulse disturbances tend to capture more headlines, but my emerging view is that press disturbances can have bigger negative effects over the long term. Therefore, I hope the 10th anniversary of the Deepwater Horizon disaster leads to a wider discussion of ways in which humans affect our coasts and oceans.

This article by F. Joel Fodrie first appeared in The Conversation on April 4, 2020.