Why Do the Marines Want Anti-Ship Missiles? 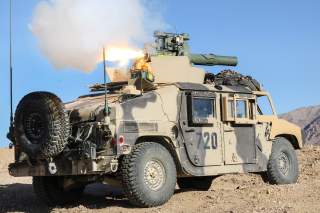 Key Point: Marines are used to support from the Navy—but they can also support the fleet from land.

Land-based, anti-ship missiles have not been America's friend. They keep the U.S. Navy from operating close to hostile coasts, such as Russia, China and Iran. And just as important, they make it much harder for the U.S. Marines to conduct amphibious assaults in vulnerable landing craft.

But irony of ironies, now it's the U.S. Marine Corps that wants anti-ship missiles. The Marines have put just published a request for ideas on how to develop weapons for a coastal defense system.

"The Marine Corps is interested in readily available shore-based, coastal defense capabilities designed to provide precision kinetic fires against ships at ranges of 80 miles or greater," according to the request posted on the FedBizOpps contract site. "A complete coastal defense system would be composed of a command and control center, and a surveillance and Over the Horizon (OTH) target acquisition capability, in addition to the kinetic launch system."

The concept is rooted in the 2016 Marine Operating Concept, which envisages a more aggressive maritime role for Marine Air Ground Task Forces. Instead of the Marines just being cargo for the Navy to transport across the seas, they can actually help to control the seas. "Marine forces can also support sea control through anti-surface warfare missions and counter-fast attack craft /fast inshore attack craft missions," urges the Marine Operating Concept.

It's logical for Marines on shore to support the fleet that supports them. Shore-based anti-ship missiles would free up Navy ships and aircraft, and Marine aircraft as well, for other missions. They could also defend the fleet from small attack craft and suicide boats, and even add long-range firepower to a naval battle between major warships. A missile with a range of close to a hundred miles could also prove devastating in confined waters such as the Persian Gulf or the islands of the South China Sea.

Marine Corps commanders have spoken of firing anti-ship missiles from a truck-mounted HIMARS multiple rocket launch system. Ironically, the nations that could probably best offer the Marines the missiles they need happen to be Russia and China. Such a sale is not likely.

There is another reason why the Marine Corps wants its own anti-ship missiles: it comes down to simple self-defense. Shore-based missiles would enable the Marines to defend the water around their beachheads.

In 1942, at Guadalcanal—one of the pivotal battles in Marine Corps history—the Marines were essentially abandoned by the U.S. Navy for a time. The Navy, shaken by the loss of four cruisers in a surprise Japanese torpedo attack at Savo Island, withdrew its warships—and the equally vital transports carrying supplies—from Guadalcanal. Night after night, the Marines on Guadalcanal were bombarded by the giant guns of Japanese battleships that sailed up to the Marine beachhead in darkness, fired hundreds of shells at the Henderson Field airbase, and left before U.S. aircraft on Henderson could go after them in daylight. Sometimes the planes could take off. Sometimes the airbase and the planes on it had been pounded so hard that they couldn't.

The Marines at Guadalcanal would have been grateful for anti-ship missiles. Today's Marines don't want history to repeat itself.