Why Do So Few Young Americans Vote? 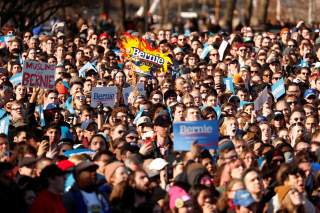 The United States has one of the lowest rates of youth voter turnout in the world. The gap between 18- to 29-year-olds and those over 60, a common measuring stick, is more than twice as large here than it is in comparable democracies, like Canada and Germany.

And early evidence from the 2020 presidential race suggests that isn’t going to change this year. Youth turnout in the first states to hold primaries and caucuses has ranged from 10 percent in Alabama to 24 percent in Iowa.

Fewer than 1 in 5 young people cast ballots in all Super Tuesday states. Compared to primaries and caucuses in the past, fewer young people are voting in 2020, while older citizens are voting at higher rates. Overall, the share of Americans who vote appears to be rising.

Recent research indicates that these patterns have fundamentally shaped the nomination process. Vermont Sen. Bernie Sanders, a progressive candidate who draws high levels of support from young people, is not doing as well as he expected because not enough of his young supporters are turning out at the polls.

So, why don’t more young people vote? And what might solve this problem?

In our new book, “Making Young Voters: Converting Civic Attitudes into Civic Action”, D. Sunshine Hillygus and I tried to answer those questions.

The fact that few young people vote is nothing new. Historically, about 55 percent of Americans have voted in presidential elections. Youth voting levels have been much lower than that for decades. In U.S. presidential elections, about 70 percent of voters 60 and up have turned out – which is nearly three times the rate of Americans between 18 and 29.

This pattern hasn’t changed much in recent elections. Even in 2018 – a year when more young people voted in a midterm election than in decades – a full 7 in 10 young voters failed to cast a ballot – versus only 4 in 10 of those eligible to vote overall. The gap between voters under and over 30 barely budged.

There is good scientific evidence that if young people turned out at the same rates as older citizens, American democracy would be transformed. Elected officials would be more likely to pay attention to the policy areas that young people care about, like climate change or public education; the people elected to public office would look more like the people they represent; and the set of public policies implemented would fundamentally change.

Many people argue that younger Americans fail to vote because they are apathetic about politics. You might have heard that millennials – people between the ages of 24 and 39 – are generally too cynical, too disinterested and too self-absorbed to cast a ballot.

But this claim simply isn’t true for millennials or the very youngest voters, who belong to Generation Z. In the 2016 general election, for example, a full three out of four of Americans between the age of 18 and 29 said they were interested in politics.

Though young people who intend to vote are much more likely than people over 30 to be derailed by obstacles.

For instance, young people are often are confused by complex and unclear voter registration rules. Moreover, youth are especially unlikely to know where they should vote and to be negatively affected when polling places get moved.

In interviews with dozens of young people, we found that many of them lacked confidence in themselves and their ability to navigate the voting process for the first time. Many told us that in their busy, hectic, and ever-changing schedules, voting often simply falls by the wayside.

Simply put, many young people want to participate, care about what happens in the political arena, and plan to participate. But they find doing so too big of a hassle to actually follow through on their good intentions.

Electoral reforms that make registering and voting easier, we’ve found through our research, help encourage young people to follow through and vote.

We’re seeing that reforms like same-day registration – which allows people to register when they come to cast a ballot – are particularly effective.

At present, however, same-day registration is available in only 21 states and the District of Columbia.

Likewise, preregistration for 16- and 17-year-olds – letting them enroll before they might go to college or join the workforce – can also substantially increase the number of voters under 30.

Unfortunately, only 18 states, along with the District of Columbia, allow preregistration.

When states implement these types of reforms, they close the gap between older and younger voters by about a third.

Our findings are consistent with early work that shows that automatic voter registration substantially increases the number of young people voting for the first time.

This suggests that reforms that work to make voting easier and expand the electorate have great potential to meaningfully increase turnout for young voters. Reforms such as lowering the voting age to 16 – which places like Takoma Park, Hyattsville and Greenbelt in Maryland and Berkeley, California allow for local elections – offer great potential to bring in the next generation of young voters.

Taking these steps won’t completely close the gap between young and older voters, but they do help.

However, many states have gone in the opposite direction in recent years. States like North Carolina, Arkansas and Florida are making registering and voting more difficult through reforms that require photo identification at the polls or severely reduce the number of polling places – which leads to long lines of voters waiting to cast their ballots.

Civics, taught in many but not all public schools, can also play a role.

Proponents for high-quality civics – from the Founding Fathers down to public officials today – have long advocated for an approach that gets young people more politically engaged. Instead, many schools favor what we call “bubble sheet civics.”

They focus on rote memorization of facts and figures about politics, government and history – the types of things that can be measured on multiple-choice exams.

We find that this approach simply doesn’t lead to a high level of civic engagement, such as voting in most elections. Surveys show that taking a civics course in high school does nothing to increase the chances a young person will cast their ballot. And there’s no difference in youth voter turnout rates between states like Florida and Arizona that mandate civics instruction and those that don’t, such as Oregon and Washington.

I don’t think it has to be this way.

We’ve observed that some schools do go beyond bubble sheet civics. They get teens and tweens to discuss contemporary political issues, encourage students to become involved in civic and political action – such as by having them help eligible citizens to register and to vote – and help their classmates register or preregister. They also practice voting in symbolic elections. Going that route can make a big difference.