Why Do Socialists and Populists Fear Technology? 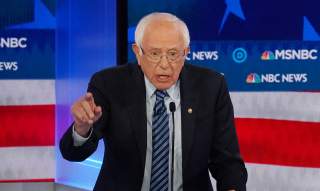 One thing democratic socialists and nationalist populists seem to have in common is a discomfort with technology. Sure, folks in both camps may love tweeting on their iPhones and binging Netflix — and one day may be happy that a terrible illness is cured through genetic editing. But the economic process that helps generate all that good stuff is less appealing to them.

On the right, a Claremont Institute essay “For Real American Greatness, A Tech New Deal” latches onto just about every tech scare story out there to make its case for government intervention into the tech sector. As I recently blogged, the authors fear an approaching “new world” where “right-wing speech about race and gender is suppressed, Big Tech is an unproductive monopoly, robopocalypse means men are all caregivers or jobless, and AI-controlled humanity is fast-evolving into posthumanity.”

On the left, a new essay in the democratic socialist magazine Jacobin takes aim at driverless cars. Now the common technologist view is that autonomous vehicles will one day save a lot of lives through the near elimination of auto accidents. As tech analyst Benedict Evans points out, accidents kill over a million people globally every year, including 35,000 in the United States with an economic impact of nearly $250 billion.

Even so, writes Nicole Aschoff in “Against Self-Driving Cars,” we shouldn’t forget the potential downsides. In fact, we should give them tremendous weight. From the essay:

Self-driving car advocates are remarkably oblivious to the developmental imperatives of a landscape characterized by looming climate catastrophe, underinvestment in basic lifesaving science, resource depletion, and yawing inequality. Instead, they zero in on ordinary working people — drivers — as the problem and support dumping hundreds of billions of dollars into dubious projects that operate on the assumption that if we can just figure out how to eliminate drivers from the equation, poof, we’ll be able to leapfrog the hard political work of developing sustainable transportation.

You know, France is known for great public transit and yet thousands still die on the roads every year. The safety case for AVs remains a strong one. Moreover, a transit system with on-demand, electric AVs and congestion pricing seems more appropriate and realistic for a less dense nation like America with a strong car culture. But perhaps the real democratic socialist issue with the AV economy is less about sustainable transportation than economic change where some folks will lose their jobs (even though others will be created) and some people will get very rich (through wealth creation rather than crony capitalism). Maybe the same goes for the national populists who also seem allergic to the sort of economic disruption inherent in a vigorous economy of expanding opportunity and rising living standards.