Why Donald Trump Is On A Winning Streak 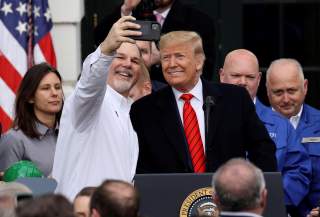 With the impeachment trial over, Donald Trump is going right back to his favorite posture—on the attack. It began with his remarks at the National Prayer breakfast bashing Nancy Pelosi and Mitt Romney for what he deemed phony religious sentiments. This was followed by a victory celebration Thursday before leading Republicans at the White House, where he lauded Rep. Devin Nunes, called his opponents “evil,” referred to “dirty cops,” and emphasized the importance of firing former FBI director James B. Comey. Next, he stated Friday that the House impeachment verdict must be “expunged” as it was a “total hoax.” Lt. Col. Alexander S. Vindman, who testified against him, is being transferred from the National Security Council to the Pentagon, where he will presumably toil in some backwater. “I’m not happy with him,” Trump declared in what must qualify as the understatement of the decade. Trump is also apparently considering dumping acting chief of staff Mick Mulvaney overboard and replacing him with Rep. Mark Meadows.

Trump does not suffer from the turbulence around him. He thrives on it. The same cannot be said for the Democrats. “We are losing our damn minds,” James Carville, the former strategist for Bill Clinton, announced on MSNBC. He had a point. The Iowa primary, which was supposed to serve as a launching pad for the next Democratic presidential candidate, turned into a mess as a faulty app failed to transfer reliable results to state party headquarters. Turnout was low and the precise actual results may never be known (Tom Perez, the head of the Democratic National Committee, is urging a recount) though Bernie Sanders and Pete Buttigieg appear to be in a tie for state delegates. The voting snafu has exacerbated divisions between the party establishment and the progressive wing of the party. Sanders’ followers are claiming that the establishment is either incompetent or tried to rig the results. Either way, Trump and the GOP could only gloat over the fiasco.

Trump himself is on winning streak. On Friday Trump got some good news from a federal appeals court in Washington. It unanimously dismissed a lawsuit filed by Democratic lawmakers that sought to prevent his businesses from receiving funds from foreign governments. Trump tweeted, “Another win just in. Nervous Nancy Pelosi and the Democrats in Congress sued me, thrown out. This one unanimous, in the D.C. Circuit. Witch Hunt!” Whether Trump really needs these foreign monies is an open question; a Washington Post article indicates that he is turning a good profit by charging the Secret Service exorbitant rates, up to $650 a night at some of his properties after claiming, at odds with the statement of Eric Trump to Yahoo Finance that “If my father travels, they stay at our properties for free — meaning, like, cost for housekeeping.”

The Democrats have a chance to start turning around their fortunes in the debate Friday night in New Hampshire—if everyone doesn’t fall asleep by the time it’s over. Scheduled to last for up to three hours at St. Anselm College, it will turn into a snoozefest if the candidates continue to indulge in academic debates about the intricacies of healthcare rather than offering an actual vision for America. The Democrats, more often than not, seem to resemble Talleyrand’s remark about the Bourbons—“They had learned nothing and forgotten nothing.” It will be critical for Joe Biden, who has shaken up his campaign staff, putting veteran strategist Anita Dunn in charge, to have a stronger showing in New Hampshire or he will be a dead man walking.

For now, however, the Democrats continue to campaign in the shadow of Trump who effortlessly commands the spotlight. As Charlie Mahtesian notes in Politico, Trump has fundamentally redrawn the electoral map for 2020: “It’s something short of a historic realignment, but more than just a hiccup. Trump has thrown the battleground state map into flux, and punctured long-held shibboleths about the potential paths to the White House.” Add in the Gallup poll showing Trump at a 49 percent approval rating and he is at the peak of his popularity and power. Can he maintain it? Or will the Democrats stage a comeback?