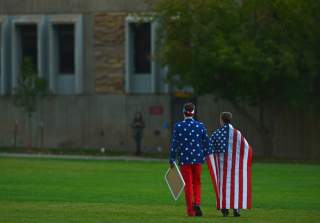 Are our institutions of higher education little more than left-wing indoctrination centers?

A recently released study found that, whether that’s generally true or not, the perception that they are indoctrinating students is fairly universal at one of the nation’s large, public universities.

A team of professors at the University of North Carolina conducted research on the attitudes of students at the school to gauge the campus culture. Their findings revealed that the culture was generally hostile to right-leaning viewpoints and to conservative people in general.

The researchers wrote that they found professors to be fairly accommodating to students with both liberal and conservative views. However, it was clear that conservative students in particular fear lower grades as a result of expressing their views and other forms of chastisement, more so from fellow students rather than school faculty.

Perhaps most worrisome of all, the study found that more than 25% of respondents said that “they would endorse blocking or interrupting events featuring speakers with whom they disagree.”

According to the researchers, there was particular opposition among liberals to opposing viewpoints.

Some of the more in-depth responses showed where the attitude that it was acceptable to shut down speech came from.

“[W]hen asked about a potential ‘Free-Speech Week’ that would include speakers from the political right, students in the liberal focus group expressed skepticism,” the researchers wrote. “Specifically, one student worried such an effort would ‘put the left and right on equal footing,’ which would be improper because ‘I don’t think much of the right is using logical arguments’ and ‘it would basically just promote far right-wing ideologies.’”

That last comment was perhaps the most revealing part of the study, which was limited to UNC, but it’s difficult not to see it as part of a general trend in American higher education.

The problem of ideological conformity extends beyond the bias of professors, who, according to another recent study, donate to 95 Democrats for every one Republican.

While many of those professors undoubtedly attempt to be evenhanded, the general left-wing culture on a typical college campus is inescapable.

Left-wing views are regarded as a given; conservative-leaning views are at best tolerated, but assumed to be wrong. Since those on the left are simply correct in their own minds, what’s the point in engaging with those who have a different point of view or set of principles? Why not just purge the heretics and be done with them?

The result of this dynamic is that the most aggressive left-wing students feel emboldened to use their power on campus to shut down the speech of those they disagree with, while conservative students must continually weigh whether expressing their own real viewpoint is worthwhile.

Unfortunately, many campuses have fed into this through their inability or even unwillingness to ensure that the First Amendment rights of their students are protected.

That’s hardly conducive to creating a haven of free inquiry that many presume colleges and universities to be, but it does explain why so many members of America’s elite cultural and political institutions are so dogmatically left-wing.

They are simply products of that college campus environment that taught them that their views are inherently correct and that conservative viewpoints are nuisances to be stamped out, rather than a serious challenge to their worldview.

“We don’t fully know how this environment has shaped a generation of graduates,” wrote  Emily Jashinsky, culture editor for The Federalist, adding:

Judging by reporting on major companies and media outlets, some young employees seem to want their workplaces to replicate the ideological culture of their campuses—progressive by default, openly intolerant of dissent.

None of this will make our political discourse any healthier.

That our colleges skew left has been obvious for generations. What this study shows, however, is that there is an implacable resistance to any ideas that would intrude on the left-wing haven that students see the schools to be. Again, it’s hard to see a difference between the University of North Carolina and countless other universities across the country.

No wonder there is now such a deep cultural divide in America, and such little ability to bridge it. The institutions that should be at the forefront of helping our putative elites understand those differences now exist in an environment that treats one side as inherently illegitimate.

Add to this the reality that student debt is reaching a tipping point and college costs are escalating. Many now question the value of a college degree, which isn’t the pathway to economic success that it once was.

All things considered, It’s easy to see why trust in these institutions is waning fast.

His article first appeared in The Daily Signal on February 21.

Image: People wear the American flag as students and protesters gather at the "Free Speech Zone" located at the University of Colorado's Business Field, while candidates gather across the street for a forum held by CNBC, before the U.S. Republican presidential candidates debate in Boulder, Colorado, October 28, 2015. REUTERS/Evan Semon