Why Don't We Celebrate the Doughboys As the 'Greatest Generation'? 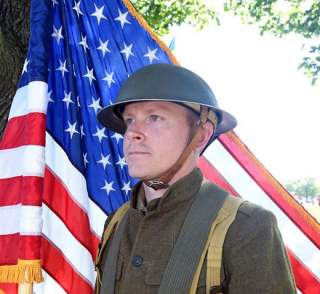 Why does the First World War get no respect in America?

After all, it’s been seventy-five years since World War II, and we still praise the “Greatest Generation.” But on this hundredth anniversary of America’s declaration of war on Germany on April 6, 1917, our nation’s participation in World War I is seldom remembered except for a few old statues on town squares.

Perhaps this has to do with time. Many Americans alive today have parents or grandparents who fought in World War II, and as of 2016, there were still 620,000 of these veterans among us. The last American veteran of World War I passed away in 2011 at age 110, but most (including my grandfather) had long since departed by then.

Or, maybe it has to with with why the war was fought. In the First World War, Johnny went marching off to fight the “evil” Kaiser Wilhelm, and returned home to parades and adulation. But then the doubts set in. Had Germany really posed a threat to the United States, or had innocent America been manipulated by greedy arms manufacturers and British propaganda? Some fifty-three thousand Americans had been killed in action, but were they heroes or just victims, pawns in yet another intra-European conflict?

And then there was the general revulsion aroused by the First World War itself. World War II is remembered as a war of motion, of glorious thrusts by tanks and aircraft and ships. The symbol World War II is blitzkrieg: the symbol of World War I is trench warfare, of dutiful sheep sacrificed on the altar of the machine gun and the barbed wire fence.

Given enough time, the “Great War” might have gone down in history as the “Greatest War.” But just twenty-one years after the armistice was signed in November 1918, the world was again engulfed by global war. And what a war the sequel was! No cartoony Kaiser Bill with spiked helmet and giant mustache. Now there were real villains—real monsters—to battle: Hitler, Mussolini, Tojo. America wasn’t being duped into intervening in a squabble between rival European empires. Now there were real causes to fight for: democracy versus fascism, good versus evil, barbarism versus civilization. Surely the men and women who fought in such a conflict must have been the Greatest Generation?

Yet far from diminishing those who fought in World War I, it only enhances their courage and commitment. In 1941, Americans had the sneak attack on Pearl Harbor to galvanize their patriotism. In 1917, America declared war on the basis that German submarines wouldn’t stop sinking neutral ships, including American vessels. This was hardly a Pearl Harbor moment, yet ultimately four million Americans served in the military during the conflict.

Comparing which soldiers had the harder war is a question that generates much heat but rarely any light. In World War II, America saw 417,000 people killed, nearly eight times the number killed in action in World War I. Yet in 1941–45, America was also able to lavishly support its armies and fleets with the most powerful war economy in history. In 1917, America was so ill equipped for war that it needed to be supplied with British tanks and French aircraft. The doughboys of World War I had it no easier than the GIs of World War II.

Perhaps this makes the First World War generation also great. Or, perhaps this illustrates the fallacy of calling any generation great because it fought a war. Are Americans any less great because they served in the Civil War, or Korea, or Vietnam, or Iraq and Afghanistan?

Let’s stop picking and choosing which of our generations is “the greatest.” Their accomplishments will always speak for themselves.

His article first appeared in 2017,