Why Even Father Time Can't Kill the B-52 Bomber 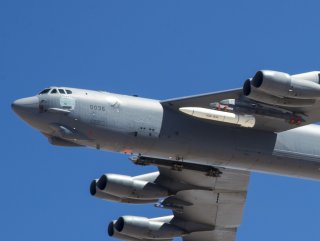 The classic, Vietnam-era B-52 bomber is getting new weapons, engines, intelligence systems, and communications equipment intended to sustain the life of the bomber for decades to come.

“We will fly the B-52 beyond 2040. Despite being our oldest bomber, it has the most life remaining,” Gen. Mark E. Weatherington, Commander, Eighth Air Force, and Commander, Joint-Global Strike Operations Center, told The Mitchell Institute for Aerospace Studies in a video interview.

Despite the age of the bomber, its airframes are considered to be still very viable, durable and able to fly for years to come, a scenario which opens the door to a wide swath of upgrades.

“This will bring 30-percent fuel savings and less maintenance down time,” he added.

The aircraft is also receiving new radar technology, a target data-centric intelligence system and a rapid, retargeting, low-frequency radio replacement to support the nuclear weapons missions communications. The new communications system for the B-52 dramatically changes the tactical equation because it enables bomber crews to adjust targeting and mission objectives by receiving updated intelligence information while in flight, as opposed to merely executing pre-established targets.

Perhaps of greatest significance, the B-52 arsenal is being massively revamped with a new internal weapons bay upgrade, enabling the B-52 to carry up to eight of the newest “J-Series” bombs.

The B-52 has previously been able to carry JDAM weapons externally, but with the IWBU the aircraft will be able to internally house some of the most cutting edge precision-guided Joint Direct Attack Munitions and Joint Air-to-Surface Standoff Missiles, among others. The upgrade relies upon a digital interface and a rotary launcher to increase the weapons payload. The first increment of IWBU, slated to be finished by 2017, will integrate an internal weapons bay ability to fire a laser-guided JDAM.

Further weapons upgrades will integrate more modern or cutting-edge weapons such as the Joint Air-to-Surface Standoff Missile, or JASSM, JASSM Extended Range and a technology called Miniature Air Launched Decoy, or MALD. A MALD-J “jammer” variant, which will also be integrated into the B-52, can be used to jam enemy radar technologies as well.

B-52 upgrades represent an interesting dual-threshold for the Air Force, which is now trying to balance a need to maintain its aging fleet through technical insertions and various sustainment efforts. Modernizing an older fleet of B-52s, B-2s, B-1s and other aircraft does include measurable limitations, as there is only so much a legacy platform can be upgraded to accommodate emerging technologies.

While the current B-52 is nothing like the carpet-bombing platform it was originally used for, Air Force leaders continually say that improving existing platforms by no means replacing the pressing need to buy new airplanes. Many platforms such as the C-130, B-52, F-15, B-2, and others are now decades old.