Why Is Everyone Running for President So Old? 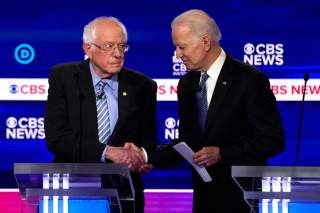 Every remaining major candidate vying to become a nominee for the U.S. presidency is a septuagenarian. While the aged field of candidates comes with its own set of concerns, it is a sign of the country’s progress toward keeping people alive and healthy for longer than ever before.

In the race for the highest office in the land, the so‐​called Silent Generation is making itself heard. Senator Bernie Sanders (D‑VT), the oldest candidate, is 78 years old, as is former New York mayor Mike Bloomberg, who dropped out of the race this morning. Former vice president Joe Biden is 77 years old. President Donald Trump is 73 years old. At 70 years old, Senator Elizabeth Warren (D‑MA) is the youngest of the major candidates. She was born in mid‐​1949.

Several major candidates have birthdays coming up before the Election Day. By November 3rd, Senator Sanders will be 79, President Trump will be 74 and Senator Warren will be 71 years old. Biden will turn 78 shortly after the election, on November 20th.

When the current President was sworn into office at the age of 70, he was the oldest president ever inaugurated in the United States. It looks like he or whoever assumes the presidency in 2021 will beat that record.

Even among the minor candidates still in the race, septuagenarians are represented. Former Massachusetts Governor Bill Weld, who is challenging the president for the Republican nomination in a protest campaign, is 74 years old. Congresswoman Tulsi Gabbard (D‑HI), who is polling at less than 2 percent nationally, is the only remaining candidate born after 1950. She is 38.

When the septuagenarian candidates were born, the polio vaccine was yet to be created, there were no commercial computers, no human being had yet been to outer space and interracial marriage was still illegal in several U.S. states.

The actuarial tables suggest that whichever septuagenarian wins in November, he or she will likely survive the next four years. Based on the average for their age, that’s a 76.8 percent chance for Sanders; 79.2 percent for Biden; 84.8 percent for Trump and, reflecting that women tend to outlive men, a 91.8 percent chance for the relatively youthful Warren. Still, there is no doubt that the vice presidential candidates will matter more than usual this election cycle.

The country’s Founding Fathers likely could not have imagined a future with such remarkable longevity. The septuagenarian field of major candidates has sparked concerns over the state of the various candidates’ health and mental acuity. While those worries should be taken seriously, the fact that so many septuagenarians are running reflects the broader demographic trend of Americans living longer, healthier lives and remaining active for many more years—a fact that should be celebrated.

This article by Chelsea Follett originally appeared in the CATO at Liberty blog in 2020.