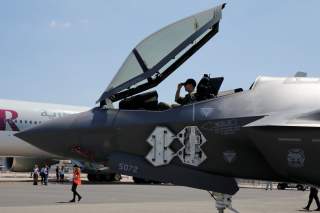 The Navy’s version of the F-35 Joint Strike Fighter, recently declared ready for combat, has netted unacceptably low “fully mission capable” rates—meaning it’s in fact almost never fully ready for combat—according to a document obtained by the Center for Defense Information at the Project On Government Oversight (POGO).

The fact that the Navy is pushing ahead with the aircraft in spite of evidence that it is not ready for combat and could therefore put at risk missions, as well as the troops who depend on it to get to the fight, comes at the same time as the Pentagon’s annual operational testing report for fiscal year 2018 shows that the entire F-35 program, the most expensive weapon system in history, is not ready to face current or future threats.

Sold in 2001 as a cheap multi-role fighter at a promised $38 million per plane, the troubled F-35, now at an average $158.4 million per copy, continues to dramatically underperform in crucial areas including availability and reliability, cyber-vulnerability testing, and life-expectancy testing.

For as much as the 2018 report from the Director of Operational Test and Evaluation (DOT&E) reveals about the F-35’s lack of progress in nearly every essential area, it is markedly less transparent than previous reports. It provides no updates on the crippling deficiencies highlighted in previous years, reports far fewer findings critical of the program than earlier reports, and contains almost no quantitative results on the F-35’s most urgent problems. The report omits any mention of the program’s fully mission capable rate—let alone the Navy version’s—which is the most significant measure of whether a fighter force is ready to show up for combat.

Despite an ongoing stream of optimistic press releases from the Pentagon, the information that is provided by DOT&E shows that the F-35 is still in trouble in these vital areas:

But the report presents precious little hard data on maintainability; availability and flying hours; weapons-testing results; ALIS-caused maintenance problems; pilot difficulties with sensors and display; and shortfalls in testing resources and realism. By leaving out any information on the program’s fully mission capable rates, which previous years’ reports included, DOT&E keeps the public from knowing the percentage of time these aircraft are ready to perform all of their intended missions. It is unclear why this is absent from the report, but it raises questions as to whether performance has actually gotten worse, and whether the Pentagon is seeking to hide that fact.

DOT&E declined to comment on any aspect of the report.

Also not mentioned are the results of several important test activities, including summer 2018’s close air support fly-off tests between the F-35 and the A-10—which, as POGO reported, were conducted under unrealistic conditions and appeared designed to favor the F-35.

According to the report, DOT&E is withholding most new testing details and results by promising to include them in the final Initial Operational Test and Evaluation report; that report is unlikely to be published until the beginning of next year, at the earliest.

Meanwhile, the F-35 Joint Program Office (JPO) is sticking to its current schedule, which would have the program starting full-rate production for the entire fleet by the end of this year, despite hundreds of critical, unresolved design flaws.

Of the DOT&E report, the Joint Program Office said: “All of the issues mentioned are well known to the JPO, the U.S. Services, our international partners and allies, and our industry team and are being aggressively addressed. The F-35 Enterprise achieved numerous critical milestones during 2018 which have set a solid foundation for the program to complete Initial Operational Test and Evaluation and move into full rate production as planned in late 2019.”

The services did not respond to POGO’s request for comment on the DOT&E report.

POGO conducted an in-depth analysis of the report. The results, together with POGO’s reporting, reveal that the F-35 program is more deeply troubled than ever, and should be of great concern to the Pentagon, Congress, and the taxpayers, who are footing the steadily rising bill.

Fighter Jets that Can’t Get to the Fight

The most important measure of an aircraft’s readiness for combat is the “fully mission capable” rate. This is the percentage of aircraft on hand that have fully functional, non-degraded vehicle systems (flight controls and engine), electronic mission systems (radar, electronic warfare systems, computers, etc.), and weapons employment capabilities—a particularly important measure for the F-35. The 2017 DOT&E report showed a 26 percent fully mission capable rate across the entire F-35 fleet. Because the 2018 report makes no mention of this rate, it is impossible to know what the 2018 rate was.

In response to POGO’s questions about the Navy’s fully mission capable rates, the Joint Program Office highlighted the entire F-35 fleet’s higher “mission capable” rate, a less rigorous—and less useful—measure showing how often the aircraft can perform at least one of its assigned tasks. The office also identified the lack of spare parts as the biggest factor impacting availability.

To tell how many planes can actually get to the fight requires a second measure, the sortie generation rate: that is, how many flights per day each fighter in the fleet completes. The 2018 DOT&E report makes no mention of it.

The fleet-wide sortie rates for the three F-35 variants POGO calculated from the 2017 report were extremely low, averaging between 0.3 and 0.4 sorties per day. During Operation Desert Storm, frontline combat aircraft including the F-15 and F-16 flew an average of at least one sortie per day, and the A-10 fleet averaged at least 1.4 sorties per day. Even under the pressure of recent Middle East combat deployment, the F-35’s rates have not improved. According to statements from the squadron commander, 6 F-35Bs onboard the USS Essex flew over 100 sorties in 50-plus days in the Middle East. In other words, each F-35B flew a third of a sortie per day—meaning they flew an average of once every three days—in sustained combat.

The 2018 report leaves out most details on the F-35’s ongoing testing. The F-35 Joint Program Office ended the Systems Design and Development phase in April 2018 in a seemingly arbitrary move, despite a large backlog of design deficiencies. The program has now transitioned from developmental testing, where engineers test to see if individual system functions meet contractual specifications, to operational testing, where military combat users test whether the overall plane is combat effective and suitable, rather than just in line with contract or engineering design specifications, which sometimes do not match up with combat needs.